The suspects, who are in their 30s and are related, were arrested in Co Monaghan 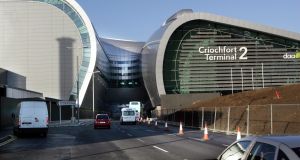 Terminal 2 at Dublin Airport. The three airline passengers who were on the minibus when it was stolen were let out at junction seven of the M1. File photograph: Matt Kavanagh

Two men who stole a hotel shuttle bus from Dublin Airport with three passengers on board rammed a Garda car before driving as far as Armagh where they rammed two PSNI vehicles and then crashed the mini bus.

Within minutes of the dramatic incident beginning just before 1am outside Terminal 2 at the airport, gardaí had been alerted and patrol cars and the Garda helicopter began a major operation, which lasted more than an hour and was spread across five counties.

The suspects were eventually arrested in Co Monaghan and were still being questioned late last night. Both men are from Navan, Co Meath, are in their 30s and are related to each other.

The three airline passengers who happened be on the minibus when it was stolen at the airport were let out of the vehicle at junction seven of the M1 near Julianstown, Co Meath.

Gardaí got a fix on the location of the Ford Transit minibus as it was being driven close to Drogheda, Co Louth.

It was pursued from that point to Dundalk and further north towards the Border. Gardaí used a vehicle to try and stop the minibus forcibly at the townland of Newtownbalregan as it was being driven from Dundalk towards Hackballscross.

However, the Garda vehicle was rammed by the suspects who managed to evade gardaí and continued their journey towards the Border and into south Armagh.

Gardaí contacted the PSNI and an emergency response was put in place in south Armagh, with the suspects driving to Crossmaglen.

The minibus was spotted by PSNI officers in the middle of the town, where it rammed two police cars before the suspects fled again and sped back in the direction of the Republic. The two suspects crashed and abandoned the minibus close to Castleblayney, where they stole a parked car and once against sped off.

However, at that point Garda sources said a decision had been taken to stop the suspects by any means necessary and shortly after they stole the car they were taken off the road with force by members of the Regional Support Unit, a heavily armed team of officers in specialist vehicles.

“The occupants of the car, two men in their 30s, were arrested and are currently detained under section 4 of the Criminal Justice Act at Carrickmacross Garda station,” Garda Headquarters said in a statement.

The men were being questioned in relation to the false imprisonment of the three tourists, who were from Colombia and the UK, and the unauthorised taking of the minibus.

The three people caught up in the early stages of the dramatic chain of events were believed to be stranded at Dublin Airport after midnight yesterday due to a cancelled transatlantic flight. However, after making their way back to the airport themselves, they flew out of the country later in the day.

In the early hours of Wednesday morning they were about to be taken to a hotel close to the airport when the minibus was stolen. The Irish Times understands they were left shaken by the experience but not physically injured.

It is understood the driver of the bus had gone to look for other passengers he was collecting when the suspects saw the minibus and decided to steal it.

Garda sources believe the men did not realise passengers were on the minibus when they took it.