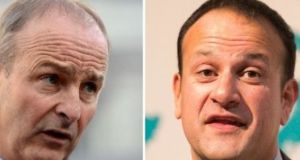 The long-anticipated meeting between Fine Gael leader Taoiseach Leo Varadkar and Fianna Fáil leader Michéal Martin to discuss the election date and the conclusion of the confidence-and-supply deal began around 6pm and concluded just after 7pm.

“The two leaders had a constructive meeting. They discussed Dail numbers and possible legislative proposals which could be passed in a further Dail session.

“They agreed to consider matters further and to meet again next week.”

No major further developments will now be expected until next week.

Speaking before the meeting, Mr Varadkar said he believed he could continue in office but acknowledged the Dáil numbers were “very precarious.”

However, he declined to answer on three occasions if the Dáil will reconvene on Wednesday after its Christmas recess. The Taoiseach said it was not a yes or no answer.

There had been speculation that Mr Varadkar could seek a dissolution before next Wednesday, when the Dáil is due to return after the Christmas break.

“The Cabinet is due to meet on Tuesday, the Dáil will be reconvened on Wednesday and that is the position until such time as it may change,” he said.

At the post-Cabinet briefing, Mr Varadkar said he believed the Government could continue in office without agreement on an election date with Mr Martin.

The Taoiseach also indicated he will speak to smaller parties and groups in the Dáil to see if they will help him continue in office.

“It is the case that with Fianna Fáil continuing to abstain that the Government can continue and that we have, I believe, sufficient votes to get our legislative program through. But obviously, the numbers are also very precarious.

“I can’t predict the outcome of the conversation I’m going to have with the leader of Fianna Fáil tonight. And it’s not just about Fianna Fail obviously, I need to consult with Fine Gael, with the Independent Alliance with other independent ministers, independents who support the government and indeed, for the parties. So you know, that’s that’s where the situation lies.”

He again rejected Mr Martin’s suggestion of an “orderly wind down”.

“My strong view, though, is that a government should never be wound down. I’ve heard Micheal Martin use them turn on several occasions, that somehow the government or the Dail would be wound down,” he said.

Earlier, Minister for Health Simon Harris has said the timing of an election will be decided by Mr Varadkar in consultation with Fianna Fáil leader Micheál Martin who are meeting on Thursday evening.

Speaking on his way into a Cabinet meeting in Marino, Dublin, Mr Harris also criticised Cork South West TD Michael Collins, whose rural Independent group has said it will table a motion of no confidence in the Minister for Health.

“I have no confidence in Deputy Michael Collins anyway so it probably won’t come as much of a surprise he wouldn’t have any in me,” Mr Harris said.

“He’s spent most of his time in Dáil Éireann opposing measures I was trying to bring forward, most particularly in relation to women’s reproductive health. What is very clear is that the timing of this election will be decided by the Taoiseach in consultation with the leader of the Opposition.

“Obviously those talks will get under way today. But one way or another we’re going to have an election in Ireland in the not too distant future and I’m looking forward to having an opportunity during that election of putting forward our vision for the health service and for the country as a whole.”

The leader of the Rural Independent Group of TDs, Mattie McGrath, has said he supports colleague Mr Collins’s proposal for a motion of no confidence in Minister for Health Simon Harris. “I haven’t had confidence in Simon Harris in a long time,” he told RTÉ radio’s Today with Séan O’Rourke show.

Mr Harris also criticised Fianna Fáil’s record in government. “If you look at all economic indicators in this country we’re going in the right direction. We’ve many challenges, every country has but in Leo Varadkar we have the right leader to steer the ship, get us through this phase of Brexit, the next phase of Brexit and there’s some crucial work going on with Simon Coveney as well in Northern Ireland today. So we have a busy programme of work to do and at some point in the not too distant future we’ll ask the people to renew that mandate.”

Mr Varadkar and Mr Martin meet in Dublin on Thursday evening amid mounting speculation the general election will be held next month.

The leaders will discuss the conclusion of the confidence-and-supply deal between Fine Gael and Fianna Fáil and the date of the next election. The deal struck in 2016 kept the minority Fine Gael-led Government in power as Fianna Fáil agreed to abstain in key Dáil votes.

Speculation in Fine Gael is growing the Taoiseach may call a snap election for next month, with either February 7th or 14th widely mooted by TDs. Mr Varadkar, however, has largely kept his counsel in public and in private.

In recent days, Mr Martin has said there is “no question” of his party voting for the Government as requested by Taoiseach Leo Varadkar, who has asked Mr Martin to support the Government in some Dáil votes if there is to be an agreed election date.

However, Mr Martin told Newstalk he would not change his position that Fianna Fáil would only abstain rather than support the Government on certain votes. It sets up a confrontation between the pair at their meeting on Thursday night.

“There is no question of Fianna Fáil taking that position, he knows that,” Mr Martin said, adding Mr Varadkar should seek the support of Independents or smaller parties if he needed to make up the numbers in the Dáil.

Mr Collins said there will be an opportunity to put forward the motion at the end of January or in early February, he added. “I am hopeful that any self-respecting politician will support this motion. I think it would be carried.”

Mr Collins said the Minister for Health had presided over a “major crisis in the health service” with elective surgeries being cancelled, record numbers on trolleys, a recruitment embargo, delayed discharges and the “highest ever” waiting lists.

“Somebody must be accountable for all this.”

Mr McGrath described discussions between Mr Varadkar and Mr Martin as “unseemly”, and he urged them to “throw in the towel”. Mr Collins, a Cork South-West TD, said he and Danny Healy-Rae had returned from Belfast earlier this week with the 51st group of patients from the southwest who had cataract surgery in Northern Ireland rather than remain on waiting lists.

When asked if he was ready for a general election if the motion of no confidence was successful, Mr Collins said: “it is up to Leo if an election is needed or not. Simon Harris is not functioning as a Minister. If that means a general election then so be it.”

The time of year was not an issue, he said, as preparations had already begun. “It’s already started. The sooner the better.” Ministers already have Vote Number 1 stickers on their cars, he said.

The Cabinet meets in north Dublin on Thursday and will discuss disability issues. The venue – the Marino Institute of Higher Education – is in the Dublin Bay North constituency of Finian McGrath, Minister of State for Disability Issues.

The meeting will also hear proposals for the establishment of a new commission to regulate the media and to replace the Broadcasting Authority of Ireland, The plans are being brought to Cabinet by Minister for Communications Richard Bruton.

Also at Cabinet, Minister for Finance Paschal Donohoe is expected to seek approval to set aside hundreds of millions of euro every year for the next five years as a buffer against expected drops in corporation tax receipts.