Flanagan says postponing RIC commemoration was ‘right thing to do’

‘Somebody lost the run of themselves’ over event, says ex-senator Maurice Manning 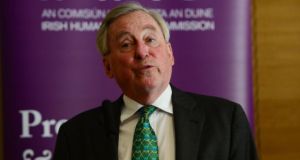 Minister for Justice Charlie Flanagan has said that calling off the planned commemoration for the Royal Irish Constabulary (RIC) was “the right thing to do”.

Mr Flanagan made the comments after a State commemoration of the RIC and the Dublin Metropolitan Police (DMP) was postponed following public and political backlash.

He was forced to defer the ceremony after a number of Ministers, TDs and Fine Gael councillors openly criticised the plans.

Before the announcement, two Fine Gael TDs, Noel Rock and Fergus O’Dowd, said that they would not attend the event which was due to take place next week. Speaking on Wednesday, Mr Flanagan said he made the decision due to the “particularly hostile atmosphere” and division surrounding the event, which he said was intended to bring people together.

“This is about reconciliation, this is about our shared history,” he told the Pat Kenny Show on Newstalk. “Of course it’s difficult, of course it’s controversial - but this was going to be too divisive.

“I acknowledge that some mistakes were made, but I believe it’s important that we continue with what was a rally important decade of commemoration.

Asked how he would distinguish between those in the RIC who may have been associated with the Black and Tans, Mr Flanagan said: “That is the great complexity.

“That is why we’re having this decade so as we can, 100 years later, acknowledge for example that member of the RIC were Irish - as were the freedom fighters in the IRA.

“But the reality is that this is our history and it’s a shared history that needs to be acknowledged. The Irish story being more than one nationalist story.”

The Minister said he had been taken aback by some of the backlash.

“I think the important thing is that we consult - and if there’s any lessons to be learned from the last 48 hours from my point of view and that is perhaps the consultation process wasn’t exhausted.

“I was struck over the last 48 hours at the nastiness, at the vitriol at the e-mails that I got, the phone calls that I got.

“This is far from a programme of reconciliation - I was quite shocked.”

Minister for Business Heather Humphreys has said she wants the postponed commemoration to be rescheduled, to mark the “sacrifice” of Irishmen who died while serving in the force.

Speaking following a presentation by IDA Ireland on Wednesday morning, Ms Heather Humphreys, a TD in the Border region for Cavan-Monaghan, said she agreed with its postponement. But she emphasised that she still wants it to go ahead in the future.

“There was a lot of misinformation about this particular commemoration. It was certainly never about commemorating anything to do with the Black and Tans. It was about remembering the Irish men that lost their lives while working for the RIC and it’s important that we remember all Irish lives that were lost,” she said. “I do look forward to it taking place.

“A number of people have contacted me because their family members have served in the RIC and they did make sacrifices and I do believe that they deserve to be remembered.”

Ms Humphreys said she does not mind when the commemoration takes place, “as long as it takes place”.

Meanwhile, a former Fine Gael TD and Senator said he would prefer to see an academic conference than a commemoration.

Dr Maurice Manning, who is a member of the expert advisory group on centenary commemoration appointed by the Government, said that the group had recommended a simple ceremony in Dublin Castle, but “somebody lost the run of themselves and called it a State event.”

He suggested the centenary of the founding of An Garda Síochána might be a more appropriate occasion to “remember their predecessors.”

Dr Manning rejected a suggestion that the Government’s decision to defer a commemoration was an indication that “tolerance has gone out the window.”

Speaking on Newstalk Breakfast, Dr Manning who is now the chancellor of the National University of Ireland, said Mr Flanagan had “behaved with great integrity”.

However, Dr Manning acknowledged that the execution of what would happen had been wrong. While consideration should be given for an event to commemorate the RIC, he personally thought an academic conference would be more appropriate.

Mr Flanagan said on Tuesday that “given the disappointing response of some to the planned event on 17th January, I do not believe that the event, as planned, can now take place in an atmosphere that meets the goals and guiding principles of the overall commemorative programme. Therefore, I am announcing its deferral”.

He said aspects of the event “were grossly misrepresented” and he still intended to proceed with the ceremony later in the year as he believed it is the “right thing to do”.