Shane Ross: ‘Going to Cabinet meetings was a weekly ambush’ 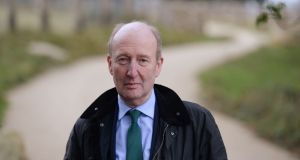 Minister for Transport Shane Ross. Suggestions he has neglected his brief for pet projects are rejected as a ‘myth’. Photograph: Alan Betson

In a few weeks from now, Shane Ross hopes to find himself in the same position he was four years ago: re-elected to the Dáil and negotiating with potential coalition partners on participation in government.

Ross, along with his Independent Alliance colleagues, has experience of how both Fine Gael and Fianna Fáil negotiate.

In 2016, he was dealing with Enda Kenny for Fine Gael and Micheál Martin for Fianna Fáil as the 32nd Dáil struggled to make sense of the inconclusive result thrown up by that February’s election.

Kenny, with whom Ross had a testy relationship, has since departed, replaced by Taoiseach Leo Varadkar. Martin still leads Fianna Fáil, and has targeted Ross for repeated criticism over the past four years.

“Micheál can do what he likes,” Ross says, before recalling the torturous 2016 Government formation negotiations.

“There’s a funny thing about the last negotiations,” says Ross. “Fianna Fáil was much easier to negotiate with.”

Martin’s party, the Dublin Rathdown TD said, was willing to agree to whatever Ross and others wanted.

“Fine Gael is much more kind of inflexible when you’re negotiating with them.

The Fine Gael “background”, according to Ross, is that they “have strong convictions”.

The Judicial Appointments Commission Bill championed by Ross has taken years to progress, and has still not passed all stages in the Oireachtas.

It was the cause of many of his rows with Kenny, and Ross acknowledges he blocked the appointment of judges at Cabinet because of slow progress on his Bill.

Ross says that it took himself and Finian McGrath, the other alliance member who attends Cabinet, a year or two to settle into Government.

“We didn’t feel very comfortable in Government and we felt we were almost the opposition sitting at the Cabinet table at one stage.

“The first few weeks were real hell. I had a very bad relationship with Enda Kenny, to start with. Going to Cabinet meetings was a weekly ambush.”

Relations got off to a poor start when Ross, in the middle of government negotiations, called Kenny a “political corpse”, a term he now acknowledges was “very hurtful”.

“It’s the sort of phraseology I use in print. I’m really sorry if it hurt him, because I didn’t mean to hurt him at all. I thought it was just part and parcel of the political colour.”

Varadkar’s relationship with the Independent Alliance has been easier, and Ross is a fan of his current boss.

“He has a totally different style. I certainly had always in writing thoroughly approved of everything he does and I still do really think [I] approve of his basic philosophy.

“When he came out, I thought it was fantastic. He did something really special in Irish public life. I suppose he’s kind of liberal, which is wonderful, and he has good attitude to politics.”

Unsurprisingly, suggestions he has neglected his own transport brief for pet projects such as the Judicial Appointments Bill and constituency issues, such as the reopening of Stepaside Garda station, are rejected as a “myth”, and he points towards increased investment in transport infrastructure, as well as legislation on drink-driving and penalty points.

Although he has been a lightning rod for criticism during the lifetime of the Government over the past four years, Ross has cut a more relaxed figure around Leinster House in recent months.

A number of successes on road traffic legislation, as well as his handling of the controversy surrounding the Football Association of Ireland, have restored his confidence.

There have been rows within the alliance, however, but Ross says the four-member group easily overcome their “spats”. Others, however, question if the group gathered together by Ross before the last election will survive the coming campaign, and predict its members will go their own way once the Dáil is dissolved.

Ross himself is looking forward to the contest, and says it may not even be his last.