Priority will be given to vulnerable groups and health workers, Martin says 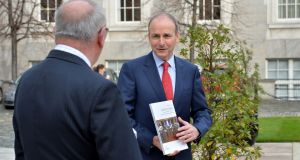 A significant rollout of Covid-19 vaccines is unlikely to happen before the middle of next year, the Taoiseach has said. File photograph: Alan Betson/The Irish Times.

A significant rollout of Covid-19 vaccines is unlikely to happen before the middle of next year and priority will initially be given to protecting vulnerable groups and healthcare workers, Taoiseach Micheál Martin has said.

Mr Martin said much depends on how quickly the various vaccines under development get regulatory approval, but he was hopeful that Ireland would be in a position to begin mass vaccinations around in the middle of 2021.

“I think we would have the first significant rolling out of the vaccine towards the middle of next year, I would hope, but it’s still early days,” Mr Martin told the Neil Prendeville Show on Cork’s Red FM.

“It depends how fast they get through the clinical trial processes and crucially gets through the European Medicines Authority and through the FDA (Food and Drug Administration) in America and the WHO (World Health Organisation) and when they sanction these vaccines as safe.”

The Taoiseach said a mass vaccination programme would be necessary to combat Covid-19 and this would prove to be a huge logistical exercise, particularly given that a vaccine such as the one being developed by Pfizer and BioNTech needs to be stored at a temperature of minus 80 degrees.

He said the government had set up a taskforce to examine how best to get the vaccine or vaccines to as many people as possible as quickly as is feasible, but with health workers and the vulnerable getting priority.

Minister for Health Stephen Donnelly is to bring proposals to Cabinet on Tuesday on the banning of takeaway pint and cocktail sales from pubs after footage of groups gathering to drink outdoors emerged over the weekend.

Mr Martin said the scenes were deeply concerning as they ran counter to public health advice on how to curb the spread of Covid-19.

He said he was “extremely concerned and very annoyed” to discover that people were congregating in breach of the guidelines which had been working well to reduce the level of the virus in Ireland.

“I think it flies in the face of what acceptable in terms of adherence to the guidelines and the regulations because I think we all have to work to try and get the incidence of the virus down and I think in particularly it’s been working well in terms of the numbers coming down in Ireland,” he said.

“We are probably the best in Europe in terms of downward trajectory (for the virus) but what happened in the last week could put that a at risk and that in jeopardy. It puts front line workers in our hospitals under pressure and it puts ICU (Intensive Care Unit) beds under pressure,” he sid.

“Wide scale congregation of people on streets just facilitates the spreading of the virus so we are going to have to review the whole takeaway alcohol phenomenon...It was never the intention that you could have large crowds gathering outside of pubs where takeaways are available.”

Mr Martin said that compared to other countries in Europe, the downward trajectory of the virus in Ireland meant that the Irish hospital system and in particular its ICU capacity is not under the same pressure as in some European countries.

“In other words, the collective effort of people is working ...- it (Level 5 lockdown) is very difficult for people but what we are endeavouring is to create space for people to have a meaningful December and a meaningful Christmas and if we all work together we can do that.”