Covid-19: Government to ban takeaway pints for remainder of lockdown 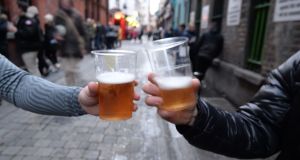 Minister for Health Stephen Donnelly plans to bring proposals to Cabinet on Tuesday to ban takeaway sales from pubs for the remainder of the Level 5 lockdown. Photograph: Alan Betson/The Irish Times.

Minister for Health Stephen Donnelly plans to bring proposals to Cabinet on Tuesday to ban takeaway sales from pubs for the remainder of the Level 5 lockdown.

The move follows reports of extensive open-air drinking in Dublin and elsewhere at the weekend.

Mr Donnelly is expected to inform Ministers that he will introduce new regulations to ban the sale of takeaway pints and cocktails as long as the country has Level 5 restrictions in place.

The State has been under these curbs, the most severe in the Government’s Living with Covid-19 plan, since October and they are due to remain in place until December 1st at least.

Some pubs have been selling takeaway pints and cocktails, which have given rise to on-street drinking by groups of people. Under licensing regulations, these drinks cannot be consumed within 100m of the premises that sold them.

Footage of groups gathering with drinks in Dublin city centre at the weekend was circulated widely, though there were also instances in many other places. Mr Donnelly’s move is seen as a way to try to discourage further incidents of this sort from happening.

A Dublin publican earlier warned that socialising and public drinking will get increasingly out of hand if controlled hospitality environments are not permitted to open over the Christmas period.

Alan Campbell, owner of The Bankers Bar, was responding to the social media footage of a large gathering on South William Street in Dublin.

Covid-19 infection rates have been falling since the Level 5 restrictions, which closed pubs and bars except for takeaway services, were introduced.

However, with the case numbers coming under control the Government is under pressure to clarify which businesses will be allowed to reopen when the curbs are lifted in the lead up to Christmas .

Mr Campbell told RTÉ Radio 1’s Today with Claire Byrne show that scenes such as those recorded over the weekend are worse than allowing pubs to reopen. He said a limited takeaway service is being run by his pub but it has been closing early to dissuade people from congregating on the street outside.

“We’ve been asking people to move off and told them they can’t hang around here. The problem is people moving to a different area,” he said, complimenting gardaí for the speed with which they moved people along on Saturday night.

Local Independent councillor Mannix Flynn said the issue was not so much the trade in takeaway drinks but rather a more pressing need for publicans to stamp out customers drinking right outside their premises, a situation that leads to “flash mobs”.

“Ninety-nine per cent of people who buy alcohol in Dunnes don’t come out and drink it in the street; they wouldn’t be allowed to do it,” Mr Flynn said, noting residents and businesses in the city were angered at the scenes of public drinking.

On Monday, as debate in relation to the latest footage continued, the Licensed Vintners Association (LVA), representing the Dublin pub industry, declined to comment.

Publicans have been grappling with how to respond to the pandemic and now face the possible loss of their busiest annual trading season amid uncertainty over the coronavirus measures that will be in place for the Christmas period.

The pub sector has continued to press the message of sensible, restricted opening for their premises.

Earlier this year, the LVA wrote to the Government saying on-street drinking should be banned and that it would not oppose any move to end takeaway sales.

The Vintners’ Federation of Ireland (VFI), which represents publicans outside the capital, is also keen to promote the message of responsible trade, with a spokesman insisting owners of premises must comply with Covid rules.

“The figures from the guards show that the vast majority [of pubs] aren’t breaking the guidelines,” he added.

The VFI is also seeking to secure the choice of safe reopening for those businesses that want it.