Government under pressure to have Minister answer questions on Woulfe appointment 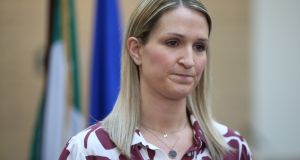 The Government is facing mounting pressure from the Opposition to facilitate a question and answer session with Minister for Justice Helen McEntee on the appointment of Séamus Woulfe to the Supreme Court earlier this year.

Sinn Féin, the Social Democrats and Mattie McGrath of the Rural Independent Group have all written to the Ceann Comhairle asking that time be put aside this week for Ms McEntee to give a statement and take questions on the matter in the Dáil.

It follows a similar request last week by the Labour Party, which the Government is strongly resisting.

Government sources argue that a debate on the appointment process would be inappropriate given the Oireachtas may have a role in considering the impeachment of Mr Justice Woulfe, were that to come into question.

However, the Opposition and legal academics say such concerns are overstated.

No date has been set for another meeting with Opposition leaders over the standoff between Mr Justice Woulfe or the Chief Justice Frank Clarke, though the issue is likely to be raised in the Dáil on Tuesday.

As the crisis continues, the board of the Judicial Council is set to meet on Tuesday. While there is no set agenda for the meeting of the 11 member group, which includes Mr Justice Clarke, sources said the Woulfe issue is likely to come up.

Concerns over the separation of powers mean that the Government is extremely reluctant to approach either Mr Justice Woulfe or Mr Justice Clarke with any suggestion of a compromise, and is wary of moves by the Opposition to bring focus onto the process underlying the appointment through a debate with Ms McEntee.

“Any such debate would inevitably touch on and potentially prejudice other potential processes the Oireachtas may have to undertake regarding the Supreme Court, as well as potentially encroach on the functions of the Courts,” a Government source said.

“It is a constitutional requirement that there is some distance between the branches of government. A Dáil debate on individual judicial nominations would also be inappropriate.”

Political sources say there is no support for the impeachment of Mr Justice Woulfe, while the view in Government is that he will not resign.

Meanwhile, Government backbench TDs are understood to have approached Ministers with suggestions on how to resolve the crisis, including the potential for finding a new role for Mr Justice Woulfe outside the supreme court directly.

In a letter sent on Monday to Ceann Comhairle Seán Ó Fearghaíl, Labour whip Duncan Smith said the party has “valid concerns in relation to the process of this appointment” and that it “want noted that this request is separate to Clifden and Golfgate [in which Mr Justice Woulfe attended a golf society dinner in Galway despite guidance on gatherings amid the Covid-19 pandemic].

“This is an important distinction to make so as we are clear as to the intent in asking Minister McEntee to answer questions in the House.”

Pádraig Mac Lochlainn, the Sinn Féin whip, emphasised in a separate letter to the Ceann Comhairle on Monday that “this request is entirely separate from the issues around the recent call from the Chief Justice . . . that Mr Woulfe resign . . . and the possible actions that the Government and/or the Oireachtas may make in reaction to this call”.

Any motion in this regard on Tuesday would have to be taken in Government time, meaning the Coalition would effectively have to agree that Ms McEntee should take questions on the matter. If this is not agreed, it is likely to spark a significant row during the Order of Dáil Business on Tuesday.

Cian O’Callaghan, the Social Democrats TD, wrote to Mr Ó Fearghaíl stating that the issue “needs to be addressed urgently”, while Mr McGrath wrote that he would “like time to be allocated to discuss the appointment process of Mr Justice Woulfe”.

Labour leader Alan Kelly has called on Ms McEntee to clarify exactly the steps taken in advance of Mr Justice Woulfe’s appointment to the court.

He has argued that under rules outlined in the Cabinet handbook, she should have told other Government leaders that three other judges had indicated their interest in the role, before bringing a memo to Cabinet recommending that Mr Justice Woulfe be appointed.

It is understood that Taoiseach Micheál Martin and Fianna Fáil Ministers were told that the Judicial Appointments Advisory Board (JAAB) had recommended only one name, that of Mr Woulfe, for the role, but were not told other judges had expressed interest in the post.

“The Minister for Justice is accountable to Dáil Éireann when the Opposition parties demand she come in and answer questions about one of the most serious matters she handles as Minister; it is not acceptable that a Government with a majority can block that,” he said on Monday.

“[Ms McEntee] needs to outline in chronological order what she did leading up to the Government decision, whether she consulted with the Taoiseach and Tánaiste, or went on a solo run contrary to the Cabinet handbook.”

The Cabinet handbook says the Taoiseach, Tánaiste, Minister for Finance and Attorney General should be informed of proposals to make judicial appointments, as should any other party leaders in Government.

The Taoiseach and Green Party leader Eamon Ryan have said they were not made aware of interest in the role from other judges, and that the likely recommendation that Mr Justice Woulfe be appointed was discussed by the three party leaders informally.

Asked when the Tánaiste became aware of the other judges’ interest in the post, a spokesman for Mr Varadkar said discussions among cabinet colleagues on public appointments were confidential.

Speaking on Monday, former Labour Party leader and tánaiste Joan Burton said that when she was in office, she “would have expected to be briefed, to broadly have known and been aware of the names.

“I just find it odd the Minister for Justice and the Attorney General would not have taken both the Taoiseach and the Tánaiste of the day through any appointments.”

In addition to blocking Opposition efforts to force a debate on the issue in the Dáil, the Government is also unlikely to seek the release of additional correspondence between Mr Justice Woulfe and the Chief Justice over the so-called “Golfgate” incident.

The publication of letters between the two judges last week, including the personal view of the Chief Justice that his colleague should resign, brought the ongoing controversy over Mr Justice Woulfe’s response to the golf society dinner incident to a head, with the political system struggling to identify a way out of the impasse that has been created as a result.

David Kenny, an assistant professor at the Trinity College Dublin school of law, argued on Monday that the Government stances on a Dáil debate and a request for further publication of documents were “misguided”.

He said the appointment of a judge was a Government function, and therefore the legislature could reasonably ask the Government questions about the performance of its functions.

He also said that removal of a judge is a legislative function, and therefore “of course the legislature can ask for it”.

“Constitutional checks and balances like removal and government accountability for [appointments] are part of the separation of powers, not threats to it,” he wrote on Twitter. “Respect for judicial independence is great, but it can’t cancel out other crucial aspects of our constitutional order.”

4 ‘I’m the meme queen’: A QAnon digital soldier marches on