Ireland in line for up to 1.6m doses of latest vaccine to report strong results

The head of the European Commission, Ursula von der Leyen, has said she hoped to finalise a deal soon with Moderna for its Covid-19 vaccine after agreeing terms with five other potential COVID-19 vaccines. Video: Reuters 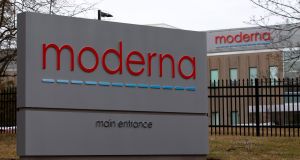 Moderna has said its Covid-19 vaccine was 94.5 per cent effective in a preliminary analysis of its large late-stage clinical trial. Photograph: CJ Gunther/EPA

US biotech Moderna said its Covid-19 vaccine had shown 94.5 per cent efficacy in clinical trials, in the second positive set of results for a potential coronavirus shot in the past eight days.

Last week, US pharmaceutical company Pfizer and Germany’s BioNTech also said their vaccine, which uses the same messenger RNA technology, was found to be more than 90 per cent effective.

The Moderna finding, hot on the heels of that breakthrough, will further boost optimism that the world can turn the corner in the management of the pandemic.

Ireland is in line for supplies of the Moderna vaccine. The European Union agreed the outline of a deal with Moderna in August for the supply of 80 million doses of the vaccine next year should it secure final regulatory approval, with options on a further 80 million doses.

If confirmed, that would likely give Ireland access to between 800,000 and 1.6 million doses of the Moderna vaccine. It has already secured up to three million doses of rival Pfizer / BioNTech Covid vaccine which is also seeking regulatory approval, as part of an EU-wide deal.

“This positive interim analysis from our phase-3 study has given us the first clinical validation that our vaccine can prevent Covid-19 disease, including severe disease,” he said.

Moderna added that it expected the vaccine could be shipped and stored for up to six months at minus 20C, and then remain stable once thawed for 30 days if refrigerated at between 2C and 8C.

In contrast, BioNTech-Pfizer have said their shot must be transported at minus 75C and can survive in a normal fridge for only five days, making it potentially more complicated to distribute.

Shares in Moderna rose 7 per cent to $96.50 in morning trading in New York, and S&P futures gained 1.2 per cent. Shares in Switzerland’s Lonza, which has a strategic deal with Moderna, added 2 per cent from earlier lows.

Karina Butler, an infectious diseases specialist at the Royal College of Physicians in Ireland and chairwoman of the National Immunisation Advisory Committee, described the announcement as “very exciting”.

“Is it too soon? Well, there are very large numbers involved when you combine both studies. Most, not all, but most side effects are found within six weeks,” she said.

Lots of work had already been done in terms of planning for the distribution of the vaccine, she said. Those who need it and are least likely to have an adverse effect would be a priority as would health care workers.

Out of 30,000 participants in the clinical trials, 95 had been identified with confirmed cases of Covid-19, the company said. Among those infected, only five people had received the two-dose vaccine, known as mRNA-1273, while 90 had received a placebo.

Tal Zaks, Moderna’s chief medical officer, described the results as a “home run” for the company’s mRNA technology. “You have an independent validation that this technology time and again can actually prevent disease. In fact, the most important infectious disease of our lifetime,” he told the Financial Times.

Moderna said it intended to submit the vaccine for approval by the US Food and Drug Administration “in the coming weeks”, raising the prospect of at least two emergency-approved vaccines before the end of the year.

The 95 Covid-19 cases in the trial included older adults and 20 participants identifying as being from diverse communities, Moderna said. The interim analysis, the company noted, “suggests a broadly consistent safety and efficacy profile across all evaluated subgroups”.

Alex Azar, head of the US department of health and human services, said the results were “an incredible tribute to American scientists and innovators, and one more reminder that there is light at the end of the tunnel”. The US government’s flagship vaccine programme, Operation Warp Speed, had provided about $2 billion to Moderna in funding and operational support, he added.

Trudie Lang, from Oxford university’s Nuffield Department of Medicine, said it was “very good news indeed to see another vaccine coming through with similar efficacy results as were reported last week from Pfizer”.

Prof Lang added that the early results suggested different age groups and diverse communities were represented in the protected group. “This is really encouraging and it further demonstrates that a vaccine for Covid is a real probability and that having more than one supplier should help assure better and more equitable global availability.”

Peter Openshaw, professor of experimental medicine at Imperial College London, noted that the trial included “many high-risk or elderly” people. “This gives us confidence that the results are relevant in the people who are most at risk of Covid-19 and in most need of the vaccines,” he added.

The European Medicines Agency said separately on Monday that it had begun a rolling, or accelerated, review of the vaccine. Ursula von der Leyen, president of the European Commission, said the regional bloc hoped to finalise a contract with Moderna “soon”.

Moderna has been looking at scaling up global manufacturing to be able to deliver up to one billion doses per year from next year. – Copyright The Financial Times Limited 2020