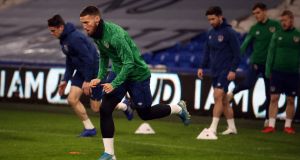 Bad luck seems to have come at every turn for Stephen Kenny during the first few months of his tenure as Ireland manager and his preparations for Wednesday’s Nations League match against Bulgaria took a further blow on Monday when it was announced that Matt Doherty and James McClean have tested positive for Covid-19.

The news means that, since the Euro 2020 playoff defeat to Slovakia last month, Kenny has been without 10 players at various stages due to positive Covid-19 tests or close contacts of positive tests while Callum Robinson and Alan Browne have both been missing on two occasions.

After the 1-0 loss to Wales on Sunday night the Irish squad and staff were all tested before flying back to Dublin with two positive tests coming back for the Tottenham fullback and the Stoke winger.

Ireland welcome Bulgaria to Dublin on Wednesday with Kenny still looking for his first victory since taking over the job while his side have now gone six matches without scoring a goal.

In that time, however, Kenny’s list of absentee players for positive Covid tests, close contact with positive Covid cases and injuries has continued to grow.

Before last month’s Euro 2020 playoff semi-final loss to Slovakia, Aaron Connolly and Adam Idah were both ruled out because they had been deemed close contacts of a non-playing member of the FAI staff who tested positive for Covid-19. However, days later that test proved to be a false positive.

Four days after that, news emerged on the morning of the Nations League meeting with Wales in Dublin that an unnamed Ireland player had tested positive for the virus while four other squad members had been ruled out of the match as they were close contacts. That left Kenny without Alan Browne, John Egan, Callum Robinson, Callum O’Dowda and Derrick Williams.

Prior to the 1-0 loss away to Finland four days later, Jack Byrne joined the list of positive tests in the Ireland camp meaning Kenny had, in total, eight players ruled out of a three-match international break.

Last week when the squad reconvened in London for the England friendly it was announced that Robinson – who had already missed the Wales match in October as a close contact – had tested positive for the virus. The day after the defeat in Wembley it was confirmed that Browne – who had also missed the Wales match as a close contact – had also tested positive after playing the full 90 minutes in the 3-0 defeat.

The list grew further then on Monday when Doherty and McClean were ruled out of Wednesday’s meeting with Bulgaria in which Ireland need to avoid defeat at the Aviva Stadium to ensure they do not finish bottom of Group B4 and suffer relegation.

Before last Thursday’s friendly against England, Connolly, Enda Stevens and Séamus Coleman were all ruled out through injury while James McCarthy left the squad for family reasons. Since that match John Egan and Harry Arter have also returned to their clubs.