Topshop parent denies it is about to go into administration 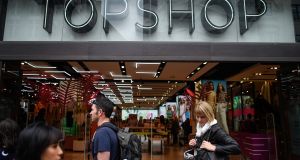 Topshop parent, Arcadia, said it was taking “all appropriate steps” to mitigate the punishing effects of a second lockdown, but denied it was about to go into administration. Photograph: Peter Summers/Getty Images

Arcadia, the fashion empire controlled by Philip Green and his family, said it was taking “all appropriate steps” to mitigate the punishing effects of a second lockdown, but denied it was about to go into administration.

The second enforced shutdown on non-essential retailers has squeezed cash flow at the retailer, which is home to brands including Topshop and Burton and was struggling even before the pandemic struck.

With a relatively underdeveloped ecommerce offering, Arcadia is heavily dependent on its own shops as well as concessions in other retailers such as Debenhams. Although most stores in Scotland and Wales are trading normally, several hundred of its shops in Ireland and England are required to remain closed until December as part of a second lockdown.

The majority of those are on high streets and in shopping centres, where footfall was slower to recover after the first lockdown.

“Clearly, the second UK lockdown presents a further challenge for all retailers and we are taking all appropriate steps to protect our employees and other stakeholders from its consequences,” Arcadia said in a statement.

Earlier, the Sunday Times reported that advisers to Arcadia were accelerating plans to place the group into a trading administration, in which its businesses would continue to trade while buyers were sought for the high-street brands.

“They are clearly in all sorts of trouble,” said one person who follows the company closely.

Arcadia did not dispute a report by Sky News that it was seeking £30 million (€3.34 million) of additional funding from its lenders to enable it to continue trading through Christmas.

A lockdown is not the only challenge facing Arcadia. In December, restrictions on evictions and winding-up petitions are due to end, leaving retailers open to legal action by unpaid landlords or suppliers, while in March a year-long holiday from business rates is due to end.

Arcadia pushed through a complex and contentious company voluntary arrangement (CVA) last year, cutting rents and giving it the option to close more stores. Since then, it has continued to raise cash through new loans, often secured on property owned by other Green family companies.

About 500 staff at its head office were made redundant earlier this year, and thousands of store staff are now back on the government’s furlough scheme.

Arcadia faces the additional complication of a deficit on its main defined-benefit pension scheme. As part of the 2019 CVA, the company and Tina Green, Sir Philip’s wife, agreed with the Pensions Regulator and Pension Protection Fund to make cash contributions to the scheme and grant it security over additional assets.

The company paused its own contributions at the start of the pandemic, but has since resumed them and needs to pay in £100 million (€111 million) over the next six months. Sir Philip declined to comment.