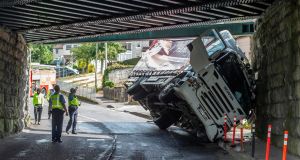 Iarnród Éireann had to put a bus transfer in place on its Dublin-Cork mainline rail services today after a truck crashed into a railway bridge on the outskirts of Cork city this morning.

The driver of the Scania rigid curtin-sided truck escaped without serious injury as he lost control of the vehicle coming down a steep incline towards the bridge at the bottom of Dublin Hill on the city’s northside.

The truck skidded in under the bridge and toppled over on to its passenger side with the cab of the truck coming to rest against one of the support abutments of the bridge which is on the main Cork-Dublin rail line.

The driver was able to get out of the cab with assistance from members of the public and units of Cork City Fire Brigade who also attended at the scene of the crash.

The driver, who is in his 40s, was uninjured but was treated for shock at the scene as gardaí closed off the road and put diversions in place to enable Iarnród Éireann and Cork City Council engineers assess the bridge.

Gardaí also contacted a crane operator to remove the truck from under the bridge, with diversions remaining in place until engineers deem it is safe to reopen the road to traffic.

Iarnód Éireann spokesman, Barry Kenny confirmed that the 10.25am train service from Cork to Dublin involved passengers being brought by bus to Mallow where they commenced their train journey to Dublin.

And it is expected that Iarnród Éireann rail passengers using mainline Cork-Dublin services today will be brought by bus to and from Mallow where rail services start and end until the bridge is deemed safe to reopen.