Cocaine and cannabis seized in Dublin, in largest haul of the year

Over 90kg of cannabis and 60kg of cocaine, worth €6.2 million, found in truck at port 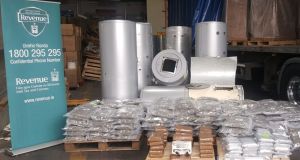 The biggest drug seizure of the year has been made at Dublin Port where €6.2 million worth of cocaine and herbal cannabis were found.

After X-ray scanning, a truck container was subjected to a more detailed search with bags of drugs found concealed inside hot water cylinders.

The driver of the truck, from Northern Ireland, was arrested after the drugs were discovered by Revenue’s Customs officers working with the Garda National Drugs and Organised Crime Bureau.

Some 93kg of herbal cannabis and 62kg of cocaine was discovered.

The herbal cannabis was valued at €1.9 million and the cocaine has an estimated value of €4.3 million.

The truck container was selected for X-ray, using a large scanner at the port, after routine profiling.

It was a curtain-sided container being pulled by a lorry and had originated in Rotterdam.

“The search, with the assistance of Revenue’s mobile X-ray scanner and detector dog Robbie, led to the discovery of the drugs concealed within a number of hot water cylinders,” Revenue said.

“A Northern Ireland-based haulier was arrested at Dublin Port by the Garda National Drugs and Organised Crime Bureau. A UK-registered truck and trailer were also seized by Revenue officers. Investigations are ongoing.”