Pensioners feel forced out of Cork neighbourhood by 'Covid parties' 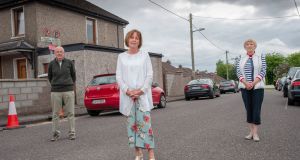 Pensioners living near University College Cork have complained their lives are being put at risk by hundreds of students who have descended on the area for “Covid parties”.

Rose O’Sullivan, who has lived on Magazine Road for more than 60 years, said students started arriving in the area after they realised their traditional summer trips to the United States or Canada were no longer an option due to the coronavirus.

“They arrived in their hundreds in the middle of a pandemic,” said O’Sullivan. “Covid sends a chill up my spine and they are saying the words ‘Covid’ and ‘party’ together. There is no respect for us.”

As the Garda reported an increase in house parties across the country in recent weeks, public health experts have warned that they are a “disaster” in the fight against the spread of the coronavirus.

O’Sullivan said people in the area, at least five of whom are over 90, started to emerge from the homes where they were cocooning as restrictions eased.

“Then all these people came in with the screaming, the roaring and the thumping music. The [pensioners] had to go back in to their houses again.

“One person living alone said to me that the music went into their very heart,” she said. “The vibrations are strong as we are terraced houses. You are talking parties 24 hours a day. Thirty to 50 in different gardens competing with each other shouting at the top of their lungs oblivious to everyone.”

Ms O’Sullivan claimed many of the students broke travel restriction rules by coming from all over Ireland to move in to the houses in large groups. She said they had money saved for going abroad or were in receipt of Covid-19 payments so had plenty of money for drink and drugs.

“There is no social distancing. They are from all over Ireland as far as Donegal sharing houses,” she said.

“One of the students said that he is here because it’s safer than possibly bringing Covid back to his family. What about us? We are like sitting ducks for Covid with these students around.”

Resident Jo O’Halloran said it feels like a “swarm of locusts” has descended on Glasheen.

Locals claim the students are behaving as if they they above the law, with one resident saying the areas has become like “Magaluf without regulations”.

Former lord mayor of Cork Catherine Clancy, who has lived locally for 35 years, said some landlords who closed up their houses on March 12th have now reopened them for easy money.

“They opened them up to people who want to party,” she said. “If there isn’t legislation strong enough to prevent this it shows the weakness around legislation. There is little or no regulations on how landlords run their property.”

She commended community gardaí who liaise with the young people. “They go to the students and talk to them and they promise to behave.”

Pensioner Aidan Cahill said the residents’ association website was tipped off about the arrival of students in mid-April by concerned parents.

“Within two weeks it was pandemonium. The stress of this is consuming all our waking hours,” he said. “Everyone stayed in and did the right thing through Covid. It feels like our efforts were worthless.”

He noted that the State’s chief medical officer Dr Tony Holohan has warned about the dangers of clusters of Covid-19 developing from house parties. “Look what is happening here,” said Cahill.

Fellow resident Aisling Sisk called on Cork City Council to take some responsibility for what is going on in the area.

“This is a perfect storm that has been brewing for years. Cork City Council completely neglected the area,” she said. “There is a vast amount of rubbish. They are kids so they couldn’t be bothered sorting it. It blows all over the place. They lob it over the wall when they are drunk.”

Residents say they are also concerned about the welfare of young people in the houses, particularly in the wake of the murder of 20-year-old Cameron Blair, a student at Cork Institute of Technology (CIT), at a house party at nearby Bandon Road earlier this year.

Ultimately, residents long for some return to normality.

Residents have met gardaí and officials from UCC, Cork City Council and the Health Service Executive about antisocial behaviour. Gardaí have confirmed they have attended various incidents in the area.

Gardaí currently do not have the powers to issue on-the-spot fines for breach of Covid-19 regulations and can bring a prosecution only following the submission of a file to the Director of Public Prosecutions.

In a statement, the council said landlords have a legal obligation to ensure their rented properties comply with certain minimum physical standards.

The council said it has increased the litter warden presence in Magazine Road and surrounding areas.

It is also identifying properties which have breached the waste presentation bylaws and will be following up on a number of houses. A bulky goods collection scheme is also being organised for the area, it said.

Meanwhile, both UCC and CIT have urged students to adhere to national health guidelines and to act responsibly. They say that both colleges are working with the local authority on this issue.