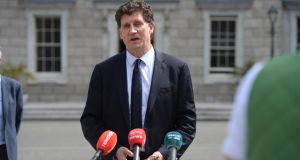 Green Party leader Eamon Ryan has apologised for repeating what he described as a “racial slur” in a Dáil speech.

Mr Ryan referenced an article in Thursday’s Irish Times by Sean Gallen, which carried the headline: “I was six when I was first called a n****r in Ireland. ”

Shortly after making the Dáil speech – which drew criticism from some Green Party members online – Mr Ryan said he was “completely wrong” to repeat the term used in the article.

The Green leader tweeted: “I made a speech in the Dáil today about the scourge of racism in our society. In quoting from an article I read this morning, I repeated a racial slur, and I was completely wrong to do so.

“I want to apologise from any hurt caused. I know this particular word should never have been used.”

Gallen, a director and writer based in Berlin, describes hearing the word being used as a child when he had just started school, having moved from Martinique to Ireland.

I made a speech in the Dáil today about the scourge of racism in our society. In quoting from an article I read this morning, I repeated a racial slur, and I was completely wrong to do so. I want to apologise for any hurt caused. I know this particular word should never be used.

“How did this word shoot off the end of the whip and bounce on the breath of a mob to find itself centuries later in the mouth of a child, on a playground in Dublin? It had to be carefully inherited, from generation to generation; a precious spell to ward off evil spirits, to keep them in their place,” he writes in The Irish Times article.

“Even a child’s mind can unpack the intention of the word. It places the victim lower than animals, less than dirt, some half-born parasite living in its own filth. Something that inspires disgust when found on the sole of one’s shoe.”

Daniel Whooley, a Green councillor in Fingal, Co Dublin, said: “I have seen his apologies, and I know he regrets what he has said, however, this is not good enough. I joined the greens to stand up against racism and social injustice in society. I will continue to call out racism when I see it.”

He added: “Eamon Ryan’s comments in the Dáil today was morally reprehensible, no person should use such words of hate regardless of context, especially in Dáil Éireann.

“The language used is the most unparliamentary and beneath the Houses of the Oireachtas. I do not believe that any parliamentarian who invokes such words, be it by mistake or on purpose, should lead an Irish Political party, the use of these words is disgusting.

“His comments today go against core principles of the Green Party. It does not matter if it was a mistake, what matters is that he used the words.”

A statement from the Green Party said Mr Ryan accepts “that there is no context” in which it is appropriate to use the term he did.

“He genuinely believed that in attempting to illustrate the strength of racial abuse that it was an appropriate context in which to use the word, but he accepts now there isn’t an acceptable context.

“It would have been very easy to allude to a slur or a term in a vague sense and people would’ve known what he meant.

“It was a misguided attempt to make what he was saying impactful, and it was a mistake”.