Bray Air Display: ‘I thought the yellow lad was a goner’ 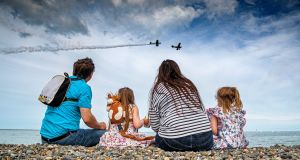 Dave Bruton had taken his yellow Sukhoi Su-31 plane skyward in an almost vertical corkscrew twist with smoke billowing behind when the engine appeared to sputter and die.

The jaws of an estimated 40,000 people at the Bray Air Display in Co Wicklow seemed to drop collectively as the plane tilted towards being upside-down somewhere between the sky and ground.

Excruciatingly, the plane appeared to just stay right there, before the engine roared back to life and it moved out over the sea.

“That didn’t happen,” a young man told a friend, his eyes still fixed on the plane. “It was only throttling back; it was the wind that took the sound away.”

It was indeed all a part of the derring-do engaged in by those who brought excitement and delight as they put their machines through their paces over the east coast on Saturday and Sunday.

Almost 80,000 people were expected to have viewed the air display over the two days, and the town’s car parks were full from mid-morning.

Paul Condell, who had travelled from Co Westmeath, where he likes to watch planes taking off from a local airfield, was among them.

Would he be getting a plane himself?

“This is enough thrill for me,” he said. “I thought the yellow lad was a goner.”

With planes flying low above crowds massed on the seafront, canny observers on Bray Head had a bird’s-eye view, in some cases eyeballing the pilots as they passed.

Highlights included a special formation display of an Aer Lingus A320 and the Irish Air Corps in Pilatus PC-9 aircraft. Sadly, The Blades – a team comprising four former Red Arrow pilots from the UK – could not make it, which was a double disappointment as one of them was to be the show’s only female pilot.

Boats moored offshore, and as Irish Ferries’ Oscar Wilde sailed past, the Defence Forces’ Black Knights parachute team jumped 5,000ft on to the shoreline. There was also a search-and-rescue demonstration, with participants relieved they could turn up having earlier been called out to an emergency. Even the lifeguard climbed on top of his cabin to get a vantage point.

A drone display saw a package carried by drone from a vessel anchored out at sea and delivered to shore. The demo aimed to highlight the safety standards and Irish Aviation Authority guidelines that must be adhered to when operating the flying machines.

Formation displays by the Ravens and the Royal Jordanian Falcons, including fly-pasts and crossovers mere feet apart, showed teamwork at its very best.

However, not everyone was pleased by all aspects of the show, with the Peace and Neutrality Alliance asking visitors to be aware of the difference between warplanes and civilian aircraft.

Roger Cole said he and the alliance were not objecting to the air display, which he acknowledged was thrilling. Rather, he said, it should be remembered that some military aircraft were used to bomb innocent civilians. While some children were looking up in awe at the display, for children in other parts of the world the appearance of military planes meant untold horror, he said.

A spokeswoman for the organisers said Bray Air Display was “an award-winning celebration of aviation and engineering excellence that aims to celebrate Ireland’s rich legacy in aviation and current status as a global leader in the aviation industry.

“The event is completely apolitical, aiming simply to entertain, educate and inspire,” she said.