Keith Byrne: ‘Nothing good comes from sending me home’ 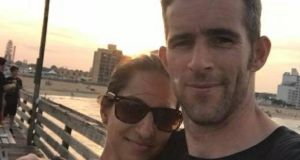 Keith Byrne with his wife Keren. The Cork man remains optimistic that his status in the US could be normalised.

An Irish man who was imprisoned as part of Donald Trump’s crackdown on illegal immigration says he is optimistic about winning the right to stay in the US.

Keith Byrne (37), from Fermoy, Co Cork, was released from detention in Pennsylvania last week following a court ruling and was reunited with his family. However, he still faces deportation proceedings and may have to return to custody once his 30-day temporary release period expires.

He has been attempting to regularise his immigration status through the legal system for several years but a minor conviction from Ireland for cannabis possession has complicated his efforts.

Mr Byrne said he was shocked and confused by his arrest because he had “been fighting for a long time to make things right”.

“To pounce on me the way they did, it was pretty shocking. Yeah I was scared, I was very scared,” he told RTÉ News on Sunday.

He said it was “really special” to be reunited with his wife and children following two weeks in Pike County jail.

US Immigration and Customs Enforcement (ICE) officers arrested Mr Byrne in Philadelphia as he drove to his painting business. He said he was put in cuffs and shackles before officers “threw him in a cell”.

Being sent back to Ireland would be “horrible”, he said, given he has a family and business in the US.

“Nothing good comes from sending me home”.

He said he was optimistic about winning the right to stay in the US with his family and that he would meet his legal team on Monday to discuss the next step.

Mr Byrne said he “never hid” in the US and that his conviction for drugs possession was embarrassing.

“It’s a 14-year-old fine that I paid in court. I don’t know what kind of message people are giving out by sending me home over that. I’ve made a good life over here so, I’ve paid my penalty.”

Mr Byrne has until the end of August to seek a judicial review of the decision of the US authorities to deny his legal status.

However, the order states that “nothing . . . precludes the United States and ICE from redetaining Keith Byrne or reinstituting removal proceedings”.

Mr Byrne’s arrest was part of a wider crackdown by ICE officers in 10 major US cities. Most of the 2,000 migrants targeted were from central America and had crossed the US-Mexican border.

The sweep had been touted ahead of time by Mr Trump, the US president, as a show of force against illegal immigration. However, the vast majority of the migrants targeted by ICE evaded arrest. According to the New York Times, only 35 people were detained.