Government could face major challenge from unions on public pay 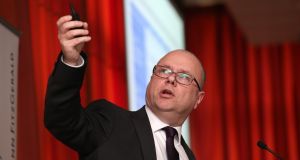 The Government’s public service pay strategy could face a major challenge in the coming weeks if it does not agree to calls by trade unions for a review of the current public pay agreement to take account of rising inflation, economic growth and emerging wage pressures.

The executive of the State’s largest public service union, Fórsa, last week directed its officials to begin preparations for “an alternative industrial strategy” if progress on such a review or process is not made.

Fórsa general secretary Kevin Callinan, who chairs the public service committee of the Irish Congress of Trade Unions, said: “If we are not in a situation where there has been progress on the issues raised then we will urge all our grades, groups and categories [of members] to start formulating claims and we will start the development of an industrial strategy to support the prosecution of those claims at the appropriate time.”

Mr Callinan said that if Fórsa developed claims this “would create its own momentum”.

Earlier this year he urged the Government to instigate a mid-term review of the pay accord to take account of higher than anticipated inflation, increased economic growth and recruitment and retention problems in a tightening labour market. He also said the current agreement had been “stretched” by the Government’s €50 million deal to settle a strike by nurses.

However, Mr Callinan said that while there had been exploratory talks with the Department of Public Expenditure, unions had now been informed that the officials had “no political mandate” to take the issue further and there would be no developments until well into the autumn.

“Unless by early September there is progress in relation to the discussions that have been taking place to create a mechanism to allow issues of concern to public service unions to be addressed, we will then be shifting our strategy,” Mr Callinan told The Irish Times.

He said this did not mean Fórsa would break the current agreement or that there would be industrial action. However, he said this change of position would “obviously create its own momentum in terms of expectations”.

He said Fórsa would also encourage other unions to adopt a similar approach.

He said such a scenario would clearly have implications for the viability of the current public service pay agreement, which is scheduled to run until the end of next year.