Improvements made for second trial of College Green plaza 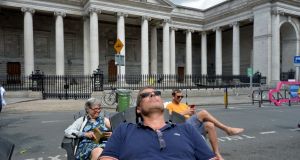 A significantly reduced number of crowd-control barriers, a bigger range of activities and better weather made for a much improved trial run of the College Green plaza in Dublin on Sunday.

While signs warning patrons against a range of activities, including the use of “foul” language and “behaviour likely to cause confusion” remained, there was a less coercive atmosphere than during the first attempt a week ago.

Metal barriers were still used to divert traffic at the Trinity College end of Dame Street, but unlike last week, did not line the sides of College Green. They were used again from Trinity Street to George’s Street to separate cyclists from pedestrians, but largely families were free to roam.

The theme of Sunday’s event was Explore and Create, with science and technology-based activities including a miniature Viking archeological dig, organised by the School of Irish Archeology, where five- to 12-year-olds could search for buried treasure; science experiments from the Junior Einstein Science Club; and a range of supersized board games including giant Connect Four, noughts and crosses and chess.

Vicky Malone, who attended on both Sundays, said this week marked a a significant improvement.

“They really seem to have taken on board the feedback from last week. There are fewer barriers, people are able to walk much more freely and there’s been an effort to expand the events,” she said.

“In comparison with an average day, the air is a lot fresher and people have space to move freely through the area. You see parents walking around not holding their kids’ hands. It’s giving space back to the people of the city.”

Lorraine D’Arcy, who came into the city centre with her husband and two children, Dan (5) and Sean (2), compared the College Green event to the trial pedestrianisation of Times Square in New York.

“In New York they put in a temporary works order to close down Times Square ahead of the pedestrianisation there. The chairs they had there went on eBay for a fortune as items of cultural iconography.”

While there were significantly fewer metal barriers, many attendees said ones still in use seemed unnecessary, citing nearby Suffolk Street, which uses flower boxes to delineate the pedestrianised space.

The signs listing activities not permitted on the plaza, such as swearing, drinking or causing “confusion” showed the council believed the citizens were not to be trusted, he said.

“The motto of the city is Obedientia Civium Urbis Felicitas or ‘Obedient citizens make for a happy city’. Clearly the council can’t let go of that urgent need to hold and control.”

College Green will be pedestrianised for a final trial next Sunday, before the council makes a new submission to An Bord Pleanála for a permanent plaza.