Only a fraction of Airbnb landlords register under new letting rules 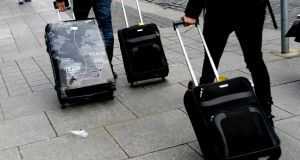 Only a fraction of the landlords who have rented out properties on AirBnB and other home-sharing websites have registered them under the Government’s new short-term letting rules. File photograph: Cyril Byrne/The Irish Times

Only a fraction of the landlords who have rented out properties on Airbnb and other “home-sharing” websites have registered them under the Government’s new short-term letting rules.

Figures obtained from local authorities in rent pressure zones – in Dublin, Cork, Galway and Limerick where the housing crisis is at its worst – show few people have registered their properties.

The regulations have been in place since July 1st, when new legislation came into effect aimed at easing the housing crisis by freeing up available accommodation to address a shortage of rental properties.

People intending to rent out properties in the pressure zones must either register with their local authority or apply for change-of-use planning permission to be able to let them out under the new rules. Only people who rent out a room in their home, or their entire home, for 90 days or less can register.

Individuals renting out a home for more than 90 days or landlords letting out a second property to tourist or others on a short-term basis must apply for planning permission either on a new or retention basis.

Permission is likely to be denied in rent pressure zones, effectively banning short-term lettings in response to the housing shortages.

Dublin City Council told The Irish Times that it had received 110 registrations for properties and four applications for planning permission as of last week.

These figures contrast with the 6,228 active rentals in Dublin on Airbnb last year, according to AirDNA, a data service that analyses listings on the home-sharing website.

AirDNA found that last year there were 2,856 entire homes in Dublin rented out for more than 90 days, while 3,398 home-sharers had rented out their homes for less than 90 days.

Galway City Council has received eight registrations – known as Form 15 registrations under the Planning and Development (Amendment) Regulations 2019 – and just one planning application.

A spokesman for Cork County Council said that it had received two Form 15 registrations but had not received any planning applications for change of use under the new regulations.

The ability and resources available to investigate breaches of the regulations remain a concern for local authorities.

Minister for Housing Eoghan Murphy said late last month that 12 staff would be added to Dublin City Council to deal with planning applications over the coming months.

Other councils have not received any extra resources, however.

“The difficulty with this is the regulations came in but there is no enforcement resources coming with them so how do you find out if people are in breach? What canny detective work can be undertaken if it is just another task added on to the list of tasks that already have to be enforced,” said one council official.

The official complained that it was “very difficult” to detect potential breaches of the legislation and obtain enough evidence “to go to court” without additional resources.

Failure to comply with the regulations carries a maximum penalty of €5,000 or six months’ imprisonment or both.

Airbnb objected to the new rules, warning that it would jeopardise more than €500 million generated by the home-sharing service for the economy in 2018.