Bill for doctors, nurses and support staff to plug healthcare gaps comes in at €135m 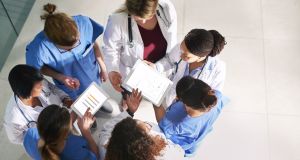 The third highest agency spend was in the area of nursing with agency staff costing more than €32m. File photograph: Getty

The Health Service Executive has spent an average of €900,000 a day on agency staff in hospitals and community healthcare organisations in the first five months of the year.

In a letter to Sinn Féin health spokeswoman Louise O’Reilly, the HSE said that between January and May the bill for agency doctors, nurses and support staff was €135 million.

Among the reasons cited for the spend were an increasing demand for services, the “impact of earlier constraints on recruitment in the public service” and “ongoing challenges in relation to the recruitment and retention of clinical staff”.

More than €46 million was spent on support service staff during the period, with University Hospital Limerick having the highest spend among hospitals on these workers at €1.7million followed by Cork University Hospital (€1.6 million) and Our Lady of Lourdes Hospital in Drogheda (€1.5million).

The second highest spend, €38 million in total, was on medical and dental agency staff. The spend on these agency staff at Portlaoise general hospital was more than €3 million between January and May and €2.9 million at Ennis hospital.

The third highest agency spend was in the area of nursing with agency staff costing more than €32 million in the same time period. Agency staff in this field cost €1.5 million at Naas General Hospital and more than €1 million at Connolly Memorial Hospital in Blanchardstown, Dublin.

Ms O’Reilly said she had calculated that nearly €2 billion had been spent on agency staff since Fine Gael entered government eight years ago.

“It is not good value for money in the first instance. Something that needs to be borne in mind is that agency and locum staff are filling full-time slots instead of full-time staff being employed,” she said. “The recruitment embargo is clearly causing an increase in agency spending. And there does not seem to be a target for converting agency spending into directly employed staff.”

She added: “What happens is that there is a situation whereby you have nobody driving services at local level. If you don’t have a full-time dedicated nurse, and these staff don’t know if they are coming back to work next week, they can’t plan. It has a huge impact.”

What is being done to address overspend?

Ms O’Reilly said the situation as it stands creates problems when it comes to “continuity of care for patients” and it also has “a very demoralising impact” on permanently employed staff and staff nurses as well.

“On so many levels, it does not represent value for money,” she said. “Ten years ago, agency staff were only ever used to cover short-term vacancies or emergencies. Now there is a high dependence on agency staff.”

Paul Reid, the recently appointed director general of the HSE, has warned his senior managers that the organisation must break even this year. In June, the HSE capped all spending on employee overtime and on the use of agency staff in a fresh attempt to control expenditure.

Mr Reid told senior managers that spending on agency staff and overtime was to be limited to 95 per cent of the levels recorded in October of last year. He said the health service would no longer spend money it did not have and breaching budgets could “no longer be considered an option”.

In the letter to Ms O’Reilly, the HSE said agency pay costs are under constant review. “Agency staff are used where there is a difficulty in recruiting and employing hospital staff and where there is a short-term critical service need. Agency is also used for flexibility to allow for variation in activity and as required to meet patient demand needs.”