Fórsa keen to lead 80,000 membership in any pay process, not be seen to follow others 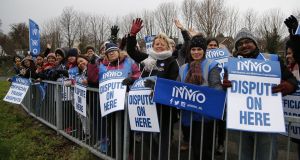 Many industrial relations observers have pointed to the financial package that resolved the nurses’ strike last spring as the catalyst for the difficulties facing the Government’s current pay agreement. File photograph: Nick Bradshaw/The Irish Times.

The €900 million pay deal for the 300,000 staff employed across the public service has been creaking for months.

However, this weekend the State’s largest public service union, Fórsa, fired a shot across the bows of Government with a warning that unless it moves to review the current accord, the whole thing may collapse.

This could result in a free-for-all with various groups and grades pursuing their own individual pay claims at a time when Government could be facing a no-deal Brexit.

Such a development would bring to an end the centralised agreements which have governed public service pay arrangements since 2010.

Many industrial relations observers have pointed to the financial package that resolved the nurses’ strike last spring as the catalyst for the difficulties affecting the current pay agreement. Many nurses and midwives are, as a result of the deal, set to receive more money than would have been the case under the overall public service pay accord.

There are also other factors at play, however. For example, Fórsa has maintained that some of the underlying assumptions on which the public service agreement was based when it was negotiated in 2017 have since changed.

What is the deal worth?

Fórsa has contended that higher than anticipated levels of inflation will erode some of the financial gains for State employees under the accord, which average out at rise of between 6.5 and 7.2 per cent over its three-year term. It also has argued that the economy is surging ahead at a faster rate than predicted and that private sector workers are receiving higher pay increases.

Fórsa general secretary Kevin Callinan several months ago urged the Government to agree to a review as provided for under the pay agreement as a means of addressing issues such as rising inflation, economic growth, recruitment and retention problems and emerging wage pressures.

There were exploratory discussions between public service unions and the Department of Public Expenditure, but these appear to have stalled.

Mr Callinan said this weekend that Government officials have told unions they have no political mandate on these issues and there are unlikely to be any developments until well into the autumn at the earliest.

Fórsa plays a key role in the centralised public service pay determination process given it has 80,000 members and the union is a supporter of that approach. But it believes it cannot ignore concerns around inflation and economic growth.

Its members will also have noted other public service groups pressing ahead with their claims for better pay and, as the largest of these groups, it will want to lead in any new pay process rather than be seen to be following others.