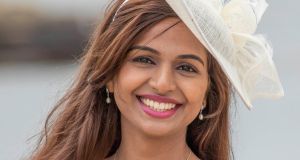 Anila Devasia: her patients, who now refer to her as ‘our Mary’, regularly provide her with advice for competing in the festival. Photograph: North West Newspix

A 27-year-old nurse who moved to Ireland two years ago will be the first immigrant to compete for the title of Mary from Dungloe during the festival in Co Donegal this week.

Anila Devasia, from Kerala, is representing her native India at the festival, which began on Saturday and celebrates local musicians and artists.

Devasia, a geriatric nurse at Dungloe Community Hospital, is the first pageant contestant not to have any Irish heritage, something that was an entry requirement in previous years.

The festival did away with the rule this year in favour of promoting diversity, and has also dropped age and martial status requirements.

The Rose of Tralee, which Devasia also applied to be part of, still requires entrants to be of Irish descent, under 29 and never married.

This year 14 women, including Devasia and this reporter, are competing to be crowned Mary from Dungloe.

Devasia, who left India in 2017 shortly after qualifying as a nurse in Delhi, emigrated to Ireland to work somewhere with “less people, less pollution, less crime and more freedom”.

She also wanted to go somewhere she would feel welcomed by the locals and said Dungloe had exceeded her expectations in this regard.

“I had a feeling that a quiet countryside town would be very friendly, and my feeling was correct,” she says. “The people of Co Donegal are the nicest I have ever met. They treat me like I’m their family and now I feel that they are my family too.”

Despite having some trouble settling down when she arrived in the harsh winter of 2017, including being “terrified” of lighting a fire in her house, she now feels part of the furniture in Dungloe.

Her 34 patients in the local hospital, many of whom have dementia, kept telling her she should “be a Mary”.

“I had no idea what they were talking about or what a Mary was but when I researched it, I saw that you get to represent your local area and meet new people,” she said. “It makes me proud to do something like this after only living in Ireland for two years because I’m so happy here.”

Devasia says her patients, who now refer to her as “our Mary”, regularly provide her with advice for competing in the festival.

“They say I need to eat more eggs and milk to make sure I have energy,” she said. “I don’t know where they get this idea but I tell them that I eat plenty of food.”

One of the most surprising aspects of life among young Irish women, according to Devasia, is their obsession with being tanned.

“Having brown skin is seen as exotic here, which has been great for me,” she said. “Of course it’s their choice to do what they want, but I find it so funny.”

Although she is not a big drinker, she enjoys the atmosphere in the local pubs. “I sometimes pretend to be tipsy on a few sips of pink gin, but I’m really just loving the energy.”

Through her involvement in this year’s festival, she wants to serve as a role model to other recent immigrants to Ireland.

She is not concerned about winning the title Mary from Dungloe, but she would like to send a message that diversity in Ireland is to be welcomed.

“It would be amazing if other people like me, who came here to start a new life, can feel welcomed and comfortable enough to join in festivals like this one.”

The festival was officially opened on Saturday night by Tony and Anne Croke, whose daughter Dawn (33) was killed in an accident in January when she was struck by an SUV on the grounds of a local school. The mother of two represented Dungloe in the 2008 festival, an “honour” her parents say she aspired toward her whole life.

“Dawn’s favourite time of the year was the festival, as she got to sit in the middle of the main street, eating sweets, drinking fizzy drinks and dancing with the music – especially when it was way past her bedtime,” says Tony. “She also loved being up the town in case she bumped into any of the Marys.”

The festival culminates with its Crowning Cabaret next Sunday, which will be broadcast live on TG4.