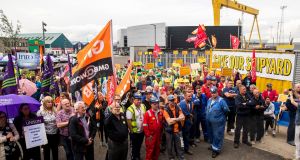 Harland & Wolff workers and supporters during a rally to save the Belfast shipyard on the eve of new British prime minister Boris Johnson’s visit to Northern Ireland. Photograph: Liam McBurney/PA Wire

“Is Harland & Wolff going to sink?” she asked the hundred or so shipyard workers and the couple of hundreds more who attended Tuesday afternoon’s rally in support of the yard and its employees.

“No!” the crowd shouted back.

“What are we going to do?” she asked.

“Save our yard!” they thundered.

Walker told the rally how Boris Johnson was expected in Northern Ireland on Wednesday in his first visit as British prime minister. What message did the rally have for him?

“Save our yard!” they roared back.

That was the battle cry and the theme of the rally, as workers in their hard hats and union officials urged London and local politicians to devise a package to rescue the yard from imminent closure.

Walker then reminded people of the history of Harland & Wolff, a company that started in 1861 and – apart from the ill-fated Titanic – built 174 ships for the British Royal Navy and built and repaired many more passenger ferries and liners, a company that at the height of production during the second World War employed around 35,000 people.

The last ship it built was the Anvil Point in 2003, but since then it has got by with ship repairs, work on oil rigs and also work on wind farm turbines and other jobs. Now that work has dried up and there are no new contracts.

Harland & Wolff’s Norwegian parent company got into serious financial difficulties and tried to offload the company but could not find a buyer. Administration looked at one point like it could have happened on Wednesday.

This prompted the remaining 130 workers to stage a protest at the gates of Harland & Wolff on the Belfast harbour estate, which has been running since Monday.

They and their union representatives argue that new British Ministry of Defence contracts for Royal Navy ships are due shortly, and that such work not only would save the 130 jobs but allow additional recruitment to take place.

The new British government on Tuesday offered “sympathy” to the workers at this “time of great personal uncertainty”, but ultimately the yard’s future is a “commercial issue”.

He, too, had a message for Johnson: ‘Get your ass down here and save this place’

That did not wash with the workers, or the unions, however. They want both Boris Johnson and the DUP, whose 10 MPs are keeping the new prime minister and his government in power, to take action, either by nationalising it, or by providing funding to keep it alive until a new buyer is found and/or MoD contracts are awarded.

Jackie Pollock is a senior Unite union official who in a previous life was a plumber at the yard for 14 years up to 1996. He, too, had a message for Johnson: “Get your ass down here and save this place.”

Citing similar threats to big industries such as Bombardier and Wrightbus, he warned: “We can’t continue eroding away the manufacturing base of Northern Ireland.”

He, and others, expect the DUP to use its clout with Johnson. “If this place closes, and there is every possibility [of that happening], or goes into insolvency, it will be on their watch and it won’t be forgotten at the ballot box in the next election.”

Owen Reidy, head of ICTU in Northern Ireland, said it was within the control and power of the British government “to make the decisive choice to . . . re-nationalise the shipyard to protect and save the jobs and to build for the future.”

“Sympathy and leaving this to the market is not good enough,” he said.

Paul Beattie, who started work as an apprentice welder at the shipyard in 1981, had a little bit of positive news for the rally, saying they had received an undertaking from management that a decision on administration had been put back until Monday.

He also said that Johnson may not want to meet the workers at the yard. “But there is nowhere in Northern Ireland that he can hide from us,” said Beattie. “We will follow him right around the province . . . If he wants to go about waving the Union flag and saying ‘UK jobs for UK workers’, we will be saying, ‘Well, Boris, you are about to close one of the biggest facilities shipbuilding-wise in the UK, and we are not going to stand for it.’”

Beattie said that the DUP “holds the key to Westminster” and should use its leverage to help save the yard. “They need to step up to the mark.”

DUP East Belfast MP Gavin Robinson met separately with the workers, saying they were working to bring about a “renaissance” in shipbuilding in his constituency. “The next number of days are critical,” he said.

Joe Passmore, a shop steward and steel worker, who has worked at the company for 30 years, said Harland & Wolff “was on the cusp” of new contracts that would save it, but needed London’s support now to survive.

Standing in the shadow of the great yellow Samson and Goliath cranes that dominate Belfast, he said as long as workers stood together “we are giants”.

The chief spokesperson for the workers over recent months has been the vocal and combative Unite union official Susan Fitzgerald, who just a little incongruously is a Dubliner with an unmistakable Dublin accent. Harland & Wolff is a company that in its heyday had a predominantly Protestant workforce and which had its sectarian tensions down the decades.

But she has the support and confidence of the workers. “She is absolutely brilliant,” said Passmore.

Her Leinster rather than Ulster background had no bearing on this tussle, she said. “So long as you are fighting for workers’ rights there are no issues like that.”

And this was a battle that could be won, she was sure, and the new prime minister on his way to Northern Ireland could have a positive part to play. Pointing to the nearby George Best Belfast City Airport, Fitzgerald said, “If Boris Johnson does not know where the shipyard is he will see it very clearly as he is flying in tomorrow morning. If he does not come here to meet with us we will go wherever he is and meet with him. He has been given fair warning.”