Armoured vehicle to be used for weddings and tours in Belfast 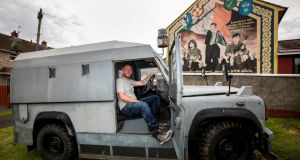 They were once a familiar sight on the North’s streets, but now one RUC Land Rover is to patrol a beat of a very different kind.

The grey armoured vehicle – which can withstand bullets, bricks and petrol bombs – is to be used as a wedding and birthday party limousine.

Art Corbett from Belfast purchased the unusual mode of transport on Friday, and has had it on display in his mother’s front garden in Ballymurphy in west Belfast since Saturday morning.

“All day, the street was just chock-a-block outside her door with people turning up to see it,” he said.

Weighing in at three tonnes, Mr Corbett’s possession comes with protective grilles on the headlights and windscreen, as well as an RUC sign used during the Troubles to signify a police checkpoint.

It has also starred in films including Maze, about the 1980s IRA prison escape.

A senior construction manager for a global company, Mr Corbett is well-known in west Belfast for his purchase, in 2001, of a British Army Saracen armoured personnel carrier, which was later sold to fund the purchase of a fire engine with his then business partner.

“People had been asking year in, year out, ‘what have you done with the Saracen?’... so I’d been looking for something, and when I came across the jeep I thought, this is a gem of a find, I can’t miss out on this, so I thought I’d grab it with both hands as quickly as possible.”

He has already had a number of enquiries about weddings. Tours are also an option, with many sightseers enjoying getting into the back of the Land Rover.

“Back in the day you’d have been face down with boots on your back,” said Mr Corbett. “You never got the chance to sit on the seats.”

“I remember with the Saracen, I had a group of six Americans and I drove them around Ballymurphy and down into Springhill, and I had to stop and close the hatches and the kids came out and threw bricks at it.

“Of course, I have to charge more for the bricks,” he joked. “But the Land Rover is a three-tonne armoured vehicle, it’s not as if it’s going to hurt it.”

Why a Land Rover? “Why not?” is Mr Corbett’s answer. “I’m an Irish republican, am I not allowed to own one? Yes, it’s a symbol of the Troubles, yes there’s a lot of history behind these vehicles, but at the end of the day they are just vehicles, and it’s about reclaiming that history and it’s also part of the healing process, it’s about coming through it and moving forward.

“If it makes anybody feel better by coming down and seeing it or sitting in it, or throwing stones at it, then that’s fine.

“I think because these vehicles have courted controversy a lot of people have shied away from them, but as long as you’ve got your insurance and your MOT you can drive them around on the streets just like a normal vehicle.

“Now I’ve just got to get it ready for the MOT.”