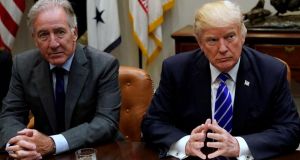 The head of the US congressional committee responsible for trade policy has warned Britain that a trade deal with the United States will not happen if the Belfast Agreement is jeopardised.

Representative Richard Neal said that Congress, and not the US president, writes trade agreements.

Speaking to the Irish Times ahead of Mr Johnson’s visit to Belfast, Representative Richard Neal said that the new British prime minister needed to recognise that this was not about a “return to empire.”

“He needs to be reminded that this is not about a return to empire,” he said of Mr Johnson “You’d be hard pressed to find everybody else who has been saying the things he has been saying as related to the backstop provision.”

Mr Neal, who met with senior eurosceptic members of the Conservative Party with House Speaker Nancy Pelosi earlier this year including Jacob Rees-Mogg, said he believed the Government should not back down on the question of the backstop.

“There should be no compromise,” he said. “The Good Friday Agreement has worked as well as anybody could have imagined. It brought to rest the longest standing political conflict in the history of the western world, and I don’t think there’s any reason for the Irish government to back away.”

He said that there seemed to be a “collective amnesia” among members of the British government about the situation in Northern Ireland before the peace process.

“There are not very many foreign policy initiatives that have worked as well as the Belfast agreement,” he said. “The United Kingdom should take some satisfaction from the success of the Good Friday Agreement – not try to undo it. When you consider that twenty five years ago this small geographic area, the size of Connecticut, was effectively a militarised state, patrolled by 30,000 soldiers – I’m worried that there are those who apparently dismiss the success of the accords.”

Noting that Mr Johnson had described the backstop as “undemocratic,” he said: “If Boris Johnson calls the backstop undemocratic then he misses the point that people in the north and in the Republican both voted for the Good Friday Agreement. It was a democratic exercise in a representative democracy.”

“There is no way that Congress is going to take up the agreement if the Good Friday Agreement is jeopardised.”

Mr Neal said he had raised his committee’s concerns about the impact of Brexit on Northern Ireland with the US Trade Representative Robert Lighthizer.

Noting that trade deals “take a long time under the best circumstances,” he said that the focus of the United States was now on renegotiating Nafta, the trade deal between the United States, Canada and Mexico, and current trade tensions with China.

Mr Neal’s comments come after Ms Pelosi told the Irish Times last week that a trade deal between the United Kingdom and the United States – a key priority for those advocating Britain’s departure from the European Union – would not be endorsed if the Belfast Agreement is undermined.

Separately, Michigan congressman Dan Kildee, also a member of the Ways and Means Committee, told the Irish Times that preservation of the Belfast Agreement was a prerequisite for any bilateral trade deal between the United States and the United Kingdom. He said that while it was a decision for the United Kingdom to leave the European Union, “what cannot be left for the UK to decide for itself is whether it is going to reverse a signature foreign policy success.”

“It is important that whatever decisions the UK decides to make about Brexit that they recognise that they should not return to the notion of a hard border and undo the successes of the Good Friday Agreement. The idea that because the UK is making this decision about their own future doesn’t mean that they get to impose that on an agreement that has significant value in crafting peace.”

“Our message to the UK leadership is – don’t expect a bilateral agreement with the US if the implementation of Brexit weakens the Good Friday Agreement in any way.”

‘United in its view’

Tuesday’s 15-minute phone call between Mr Varadkar and Mr Johnson was described by both Dublin and London as “warm”.

Mr Varadkar told Mr Johnson that the backstop is needed because of decisions taken by the UK as it leaves the EU.

“Noting that the Brexit negotiations take place between the UK and the EU, the Taoiseach explained that the EU was united in its view that the withdrawal agreement could not be reopened,” a Government statement said, in an indication of Ireland’s desire to remain part of the EU27 and not be drawn into bilateral talks with the UK.

“Alternative arrangements could replace the backstop in the future, as envisaged in the withdrawal agreement and the political declaration on the future relationship, but thus far satisfactory options have yet to be identified and demonstrated.”

Downing Street said Mr Johnson told Mr Varadkar the “UK will be leaving the EU on October 31st, no matter what”

“He said that in all scenarios, the government will be steadfast in its commitment to the Belfast Agreement and will never put physical checks or physical infrastructure on the Border.”

Both Dublin and London spoke of the need to see the Northern Irish Assembly and Executive restored as quickly as possible.

Mr Varadkar invited Mr Johnson to Dublin. Sources said Mr Johnson did not immediately take up the offer but only said he looked forward to engaging further in future.