Workers in Ireland’s southeast earn just over half the national average, survey finds

Lack of high-quality jobs is taking a toll in the area, with Wexford the worst-off, report says 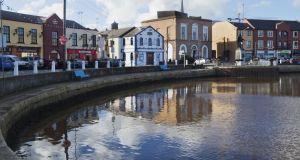 People in the southeast earn little more than half of the national average, according to a major economic survey, which lays the blame on the lack of high-quality jobs in the regions.

The South East Economic Monitor has found that when returns for taxes on work are calculated, including PAYE, universal social charge and self-employed taxes, the figure is 52 per cent of the national average.

Written by Waterford Institute of Technology academics, the report quotes CSO figures showing the unemployment rate in the South-East was 6.7 per cent in the first quarter of 2019, above the national average of 4.8 per cent. But the local economy is now growing again, if more slowly than the rest of the country.*

The document focuses on Waterford, Kilkenny, Wexford and Carlow and is based on an analysis of job creation and taxation returns across a number of sectors, and examination of the numbers in minimum-wage jobs.

Unemployment in the southeast stands at more than 22,000, which the report’s authors argue is a significant over-representation given that the region’s population makes up less than 9 per cent.

The Government’s Action Plan for Jobs (APJ) set a target of bringing the region’s unemployment numbers to within one percentage point of the State average but this has not happened.

“Worryingly, we can find no evidence of significant disruptive actions taken to support Government’s commitments in the APJ,” said one of the report’s authors, Dr Cormac O’Keefe.

Meanwhile, the Government’s Ireland 2040 plan does not include “identifiable measures” to deal with the key issues affecting job creation, and efforts to cut the Live Register.

Housing and other costs are lower, but a lot of bills are the same, said another of the report’s authors, Dr Ray Griffin: “National decisions are taken for the average person but not the southeast person, and it is clear there is a difference,” he said.

Examining the record of the IDA and Enterprise Ireland, the report found that just over 5 per cent of all IDA-supported jobs were in the region, when population numbers would suggest that the figure should be closer to 9 per cent.

Dr O’Keeffe contends there would be roughly an additional 8,200 IDA jobs and a further 6,500 spillover jobs if the region was getting its “fair share”, leading to an economic loss for the regions of hundreds of millions.

The southeast received 6 per cent of IDA visits in the State in 2018, which, according to the report, “suggests little appetite to address the deficit in IDA-supported jobs in the region”.

The gap, said Dr O’Keeffe, must be closed. The IDA’s current regional strategy is based around Cork, Limerick and Galway, “all of which have more than a fair share of IDA jobs”.

Enterprise Ireland, however, supports “a fair share of jobs”, according to the report’s other author, lecturer John Casey, which showed that the region has “the reserves, capacity, entrepreneurial talent” for economic growth.

* An earlier version of this story incorrectly stated that unemployment was more than twice the national average in the south east.

* The Press Ombudsman has upheld a complaint that The Irish Times breached Principle 1 (Truth and Accuracy) of the Code of Practice of the Press Council of Ireland.