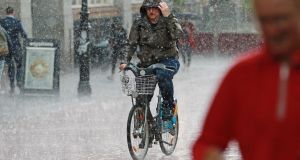 Irish Rail services have been severely disrupted, roads have been flooded and the National Gallery closed after flash floods hit the east of the country on Tuesday afternoon.

Irish Rail temporarily suspended at least four of its services on Tuesday as a result of the weather.

Lightening damaged the signalling system near Maynooth, which resulted in all services between Connolly and Maynooth/M3 Parkway being suspended from about 3pm until about 6.30pm.

Irish Rail said the signal fault had been rectified on Tuesday evening and Maynooth/M3/Sligo services resumed to normal, though initially with delays of up to 80 minutes.

A number of manholes lifted during the showers and there were reports of road flooding, a council spokesman said. There are also reports of a number of basement properties in the city centre experiencing flooding.

“Our drainage staff attended immediately and have re-seated the manholes and cleared the flooding,” the spokeswoman added. “The City Council’s drainage staff will remain on call for the duration of the weather warning and will address any issues that arise.”

The National Gallery on Dublin’s Merrion Square had to be evacuated on Tuesday afternoon after heavy rain left two rooms flooded.

Update: Maynooth/M3/Sligo services have resumed following earlier lightning damage. Delays up to 80 minutes remain. We are working to minimise these where possible https://t.co/GQPgzWflBu

Visitor notice: Today’s sudden rainfall resulted in flooding in two of the Gallery’s back-of-house staff areas. As a precautionary measure, the Gallery has closed this afternoon. It will reopen tomorrow.

While none of the public areas of the gallery were impacted by the flooding a decision was taken to close for the afternoon as “a precautionary measure”.

Met Éireann has warned that heavy, scattered showers will continue late into the evening.

The national forecaster said the heavy downpours that hit most of Leinster on Tuesday afternoon are a result of a “low pressure system” over Britain.

“These showers are moving off to the Irish sea from Britain and affecting parts of Ireland. Where these showers do hit, they could be heavy and thundery and bring some high rainfall totals which could result in some spot flooding places, particularly in urban areas,” Met Éireann said.

Dublin Airport recorded 12 mm of rain on Tuesday afternoon, which would be considered “very heavy rainfall”, the forecaster added.

AA roadwatch urged motorists to take care on the M50, following the heavy downpours which have resulted in surface water along the motorway.

Met Éireann said: “The chance of further heavy showers across much of Leinster and Ulster, up until this evening, at around 8pm or 9pm but they’ll be hit and miss so some areas will remain dry and other areas will catch a heavy deluge.”

It will be cloudy tonight, with patchy outbreaks of rain in Leinster. Elsewhere, rainfall will ease tonight, it’s going to become mostly dry apart from a few light showers and perhaps a drizzle in the west of the country.

Wednesday is expected to be a dry day in most areas with some sunshine, but the west is likely to witness a few showers.

A spokeswoman for the National Gallery said: “Today’s sudden rainfall resulted in flooding in two of the gallery’s back-of-house staff areas.” She said the gallery would reopen as normal on Wednesday morning.

It is the second time this year the gallery has had to be evacuated and the third time it has been at least partially closed.

In January a small fire broke out in a server room in the building which led to it being closed. And earlier this month two key sections had to be closed after a light fixture fell and smashed in one of its historic wings.

Both the Milltown and Dargan wings of the gallery, which house works from Irish artists including Roderic O’Conor, John Lavery and Jack B Yeats, as well as European collections, were impacted by that incident.

It comes after both underwent extensive renovations in the early part of this decade.

The Dargan Wing was closed in 2011 while the Milltown Wing shut its doors to the public in 2014, with both reopening just over two years ago.