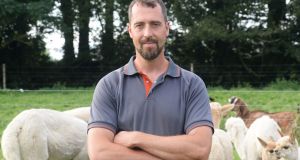 Glyn Evans with alpacas at his Co Meath farm. The microbiologist says that when visiting children encountered the alpacas he noticed benefits, ‘especially on children with learning difficulties’. Photograph: Seamus Farrelly

Animals have become the latest casualty of insurance cover as owners of some pet farms scramble to rehome dozens of breeds before being forced to close.

One pet farm in Meath is preparing to close on Wednesday, after failing to secure an insurer to renew their premium of just €370 a year.

Glyn Evans started breeding alpacas on his farm at Boardsmill, Trim, four years ago but decided to start a pet farm after noticing the positive effects the animals were having on children.

The microbiologist is now trying to find homes for many of the 90 animals onsite before closing on Wednesday after insurers refused to cover his business.

“I started breeding alpacas and children used to visit and I noticed the benefits the animals were having, especially on children with learning difficulties,” he said.

“Parents were taken aback at the calming effect it would have on their non-verbal children who would suddenly start to say a few things after being around the animals.

“Children from troubled backgrounds would arrive all bravado but would be offering to volunteer here by the time they were going home.

“This spurred me to continue the farm and get more animals for the March to October period that we open. I have 14 alpacas and about 80 other animals including wild boar, an iron age pig, rheas (type of ostrich), guinea fowl, sheep, goats, an owl and ducks.

“My current insurer is UK-based and is pulling out of the Irish market. One Irish insurer offered to quote me on the basis I put up fencing which is totally against why I started the farm in the first place. So I’m closing on Wednesday.

“I’ve a few people lined up to take animals on a temporary basis so I can take them back if the farm opens again. I’ll hold on to the owl, alpacas and rheas.

“I work full-time so had to get up at 4.45 each morning to feed the animals before heading off to work. I’d get back after 8pm some nights and feed them all again. It was a big undertaking but I enjoyed it.

Meanwhile in Co Mayo, owners of Kiltimagh Pet Farm and Wildlife Park Denise and Vincent Kelly have also had to rehome almost all of their 200 animals after being forced to close just over a week ago.

“We have been operating 12 years both on our eight-acre site and with our travelling farm but now we have to consider our future after being forced to close,” said Denise Kelly.

“We had to then rehome as many animals as we could, as quick as possible, because we just can’t afford to feed them without any income now.

“We were told our UK insurer was pulling out of the Irish market because of uncertainties in the market due to Brexit.

“I’ve been in a wheelchair for the last three years due to an accident and the pet farm helped my recovery. It gave me a reason to get up and out in the morning.

“Now I’ve nothing to fill my day with. We are just gutted.”