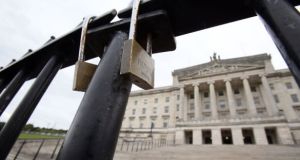 Baroness Nuala O’Loan and former Church of Ireland primate Archbishop Robin Eames have called on Theresa May to either scrap the Northern Ireland bill in its present form or amend the bill so that any changes to abortion law in Northern Ireland can only happen with the support of a majority of Assembly members.

As the Northern Ireland bill reaches the House of Lords on Monday Baroness O’Loan and Lord Eames wrote an open letter to the British prime minister urging her not to allow the proposed legislation relating to abortion to proceed.

Last week House of Commons MPs voted by 332 to 99, a majority of 233, to implement a United Nations report that said the lack of abortion legislation was a violation of the human rights of women in Northern Ireland.

The letter from Baroness O’Loan and Lord Eames said the move to liberalise abortion law without the support of Stormont Assembly members “treats the people of Northern Ireland with contempt”.

Mass-goers in Northern Ireland on Sunday were urged to support the open letter. By Sunday night more than 10,000 had endorsed the letter, according to the Both Lives Matter organisation.

“The imposition of this legislation on Northern Ireland in its current form, voted for only by MPs who do not represent constituencies in Northern Ireland, would represent a massive democratic deficit,” Baroness O’Loan and Lord Eames said in the letter.

They said that in 2016 members of the Assembly, which is not sitting, voted against changes to abortion law. They called on Mrs May to either withdraw the bill “recognising that that the way it has been changes is unconstitutional” or to accept an amendment from Baroness O’Loan whereby a change to abortion law only could happen with the support of a majority of MLAs in a restored Assembly.

“It has the capacity to undermine the delicate political calibration between Northern Ireland and Westminster and to cause significant damage to attempts to restore the Northern Ireland Assembly, ” said the two peers.

Baroness O’Loan said she was shocked that the British government “has dropped their long-standing policy of neutrality on abortion and respect for devolution”.

“One-hundred percent of Northern Ireland MPs who have taken their seats in Westminster voted against the amendment introduced by Stella Creasy. None of the MPs who voted for it represent constituencies in Northern Ireland,” she said on Monday.

She added, “These and other matters form part of the current negotiations being conducted by the government in an attempt to restore the Northern Irish Assembly – something the people of Northern Ireland are crying out for. To do this at this time is to imperil the future of those talks.”

Baroness O’Loan said she had been “inundated with messages objecting to the fact that the government is proposing to ignore the devolution settlement and amend the defective bill and support it rather than acting to respect the expressed will of the people of Northern Ireland”.