The Irish Times view on marriage and abortion: change is coming in the North 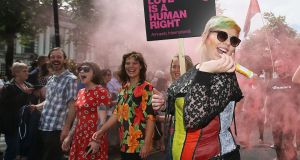 People take part in Belfast’s annual Pride parade. The extension of abortion and same-sex marriage rights to Northern Ireland has come a step closer after the House of Commons in London voted to introduce both by October 21st. Photograph: Brian Lawless/PA Wire

The extension of abortion and same-sex marriage rights to Northern Ireland has come a step closer after the House of Commons voted to introduce both by October 21st. The measures will take effect on that date, without the need for another vote, unless power-sharing talks lead to the restoration of the Assembly and the Executive in Belfast before then.

For campaigners on both issues, who have fought tirelessly to secure for people in Northern Ireland the same legal rights as those in Britain and in the Republic, this is an important milestone. It will be particularly satisfying for the LGBT community, who have suffered under a politico-legal system that enshrined their second-class status, but who can now see that marriage equality is finally within reach.

This debate should have been over long ago. Opinion polls show clear majorities in Northern Ireland in favour of abortion and same-sex marriage rights. The reason that popular will has been frustrated for so long is the obstinacy of the ultra-conservative Democratic Unionist Party (DUP), which bridles at the mere mention of divergence with Britain on issues it does not like – checks on products crossing the Irish Sea post-Brexit, for example – but eagerly dispenses with that principle when divergence suits its agenda, as it has on abortion and marriage.

These are “sensitive issues”, the DUP MP Jeffrey Donaldson said on Wednesday, and should have been for the people of Northern Ireland to decide “through their elected representatives”. This is the same party, lest we forget, that defies the majority in Northern Ireland by supporting Brexit and has voted repeatedly against a withdrawal plan aimed at averting a no-deal exit and the disastrous consequences that would follow for the people the party purports to represent.

In theory, Sinn Féin could now opt for a tactical stall, or the DUP could refuse to negotiate under threat

On abortion and marriage, the DUP has lost. It lost the debate long ago. Now it has lost the votes. In the marriage amendment tabled by British Labour’s Conor McGinn, MPs voted by 383 to 73 in favour. Just 61 Conservatives joined their supposed allies in the DUP in voting against. Some 82 Tories voted no on abortion, but the result – 332 for, 99 against – was still emphatic.

What MPs have said is this: unless the parties agree a deal to restore the institutions in Belfast by October 21st, we will give effect directly to these social changes. In theory, Sinn Féin could now opt for a tactical stall, or the DUP could refuse to negotiate under threat. But both want devolution to be restored. So they should see this as an opportunity. Abortion and same-sex marriage rights are coming to Northern Ireland – public opinion and political shifts guarantee as much. The only question is when. By accepting that reality and removing the issues from the talks agenda, the parties can focus on a small number of differences that truly exercise their voters.