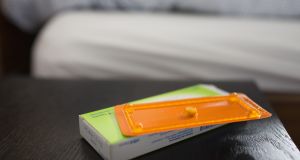 A woman is to go on trial in Northern Ireland in November charged with obtaining abortion pills that she gave to her teenage daughter. File photograph: Ute Grabowsky/Getty Images.

A woman is to go on trial in Northern Ireland in November charged with obtaining abortion pills that she gave to her teenage daughter.

The 38-year-old, who cannot be named due to reporting restrictions, has been charged with procuring the pills between June 30th and July 30th, 2013.

She is charged with unlawfully procuring — and unlawfully supplying — a poison or other noxious thing, namely mifepristone and misoprostol, knowing that the same was intended to be unlawfully used or employed with intent to procure a miscarriage.

The charges were brought contrary to section 59 of the Offences Against the Person Act 1861. The case was listed for mention at Belfast Crown Court on Tuesday, which prompted Belfast Recorder Judge David McFarland to ask if a trial date could be fixed.

After noting “the trial itself should not take too long”, a trial date was fixed for November 18th.

Although no details of the case have emerged, it is understood the woman has been charged with obtaining abortion pills for her 15-year old daughter.