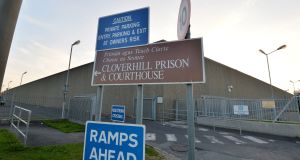 The Minister of State at the Department of Health, Jim Daly, was told during a visit to Dublin’s Cloverhill Prison that it was a ‘wholly inappropriate’ place for people with severe mental illness. Photograph: Alan Betson

Prison chaplains have pleaded with the Government to cease the “harrowing” practice of locking up people with severe mental-health problems.

Minister of State at the Department of Health Jim Daly was told during a visit to Dublin’s Cloverhill Prison that it was a “wholly inappropriate” place for people with severe mental illness and that “such individuals must be accommodated in appropriate healthcare facilities”.

Cloverhill is one of the State’s largest prisons and holds inmates who are on remand awaiting trial or sentence. It is currently at 101 per cent capacity with the D2 landing, which houses prisoners with mental illness, particularly hit by overcrowding in recent months.

Prisoners on D2 have recently been forced to sleep on the floor due to a lack of beds and a long waiting list for a place in the Central Mental Hospital, the State’s only facility for offenders with severe mental illness.

“The State is failing people who are mentally ill by knowingly relying on the existence of Cloverhill Prison to incarcerate them, rather than addressing their particular needs in other, more appropriate ways,” the Cloverhill chaplaincy service said. It compared the facility to an “asylum”.

Details of Mr Daly’s visit and the chaplaincy service’s criticism were contained in a series of annual reports from the chaplains of the country’s 11 prisons which were released to The Irish Times under Freedom of Information legislation.

In Wheatfield Prison the chaplaincy said mentally-ill prisoners were being “doubly punished” and officers were at risk of injury as a result. It highlighted the use of long-term isolation for troublesome prisoners and said some men were being kept secluded for months.

One young man was held in isolation for “an inordinately long period of time” in 2017 without knowing how long he would remain there, the chaplaincy said. He was only moved when he assaulted a prison officer, and received additional punishment.

The chaplaincy said it wondered if the man’s long-term isolation was a factor in the attack.

These views were echoed by chaplains in Midlands Prison, the countries largest detention centre, who said Irish prisons were “not close to suitable” for caring for those with mental health difficulties.

Under law chaplains in each of the country’s 12 prisons must provide an annual report to the director general of the Irish Prison Service (IPS).

These reports, which tend to be significantly more critical than IPS reports, used to be publicly released but this practice ceased in 2010.

Despite the requirement for yearly reports, the information released to The Irish Times shows many prison chaplains fail to file reports. Between 2014 and 2017, 48 reports should have been filed but only 16 were received.

In 2016 only one prison chaplain, in Wheatfield, filed a report. The chaplaincy services in Mountjoy and Arbour Hill did not file reports between 2014 and 2018.

As well as concerns about mentally-ill prisoners, the reports contain strong criticism of conditions in several facilities, including increasingly strict rules for allowing inmates out on compassionate release for funerals.

Last year the Wheatfield chaplaincy said the granting of compassionate temporary release “has all but disappeared and attendance of funerals is no longer granted”.

Visits to dying relatives in hospital or to view remains in funeral homes are also frequently denied. “We see daily the impact of prisoners, some who have suffered multiple bereavements, who are unable to move on from their grief due to a lack of normal grieving processes.”

In 2018 chaplains in Midlands Prison said they believed the 400 sexual offender inmates in the facility were being discriminated against because they were not considered for temporary release or transfer to open prisons.

“Discrimination and bias towards them is evidenced in the way they are spoken about,” the chaplaincy said. Homelessness and lack of employment prospects on release are also an issue and raise the risk of reoffending.

The chaplaincy said many older prisoners were discriminated against because they were too infirm to take part in school or workshops and therefore did not qualify for enhanced privileges.

Other common concerns raised by chaplains in various institutions included a lack of staff to run workshops – some of the workshops set up in Cork Prison had never been able to open, its chaplaincy said last year – and frequent leaks to the media about high-profile inmates.

A lack of chaplaincy staff was a major issue in several prisons, particularly in Midlands where chaplains said in 2018 they were reduced to a “firefighting” role and could not provide the necessary support to inmates.

Chaplains have an significant role in prisons where inmates are often far more interested in religion than outside society, the Cloverhill chaplaincy noted.

A common element noted by many chaplains was the increasing need to accommodate the spiritual needs of non-Christian prisoners, particularly Muslims.

This year the Cloverhill chaplaincy said consideration should be given to how to accommodate Friday Prayers for Muslim men. The prison has made provision for special eating times for Ramadan for several years.

The Dochas Centre chaplaincy said it provided copies of the Koran and prayer mats to its the Muslim women in custody there, while an Iman visits Midlands Prison once a month.

Although many of the reports paint a bleak picture, many chaplains made a point to noting the positive aspects of prison life.

The chaplain in Shelton Abbey, an open prison accommodating 115 inmates, described musical events, a prisoner-run car-valeting service for staff and the facilities “beautiful gardens and grounds”.

“Last Christmas, we had a candlelit Mass on Christmas Eve where the governor handed out a gift to each prison after service.”

Praise for prison staff, particularly in how they deal with mentally-ill prisoners with minimal resource, was nearly universal.

Mindfulness has been greatly beneficial to prisoners in Wheatfield, the chaplaincy there said in 2014. It recommended a “mindful unit” be established as a first step towards creating a “mindful prison”.