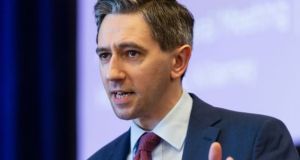 New proposals for exclusion zones outside healthcare centres that provide abortion care are expected to be given to the Minister for Health Simon Harris later this week. Photograph: SON Photo

New proposals for exclusion zones outside healthcare centres that provide abortion care are expected to be given to the Minister for Health Simon Harris later this week.

Mr Harris has been in consultation with the Attorney General and the gardaí in relation to the planned legislation.

He is due to receive a set of proposals as to how the new law will work in the coming days following these consultations. It comes after an anti-abortion protest last week saw a number of baby-sized coffins placed on the ground outside the National Maternity Hospital. “This has taken far longer than I expected but I hope to have proposals on this matter shortly.

While the Department has continued to engage with the Attorney General and indeed An Garda Síochána and I want to assure women and healthcare staff that there is existing legislation in place to protect them and to protect patients,” Mr Harris said.

“The result of the referendum last year gave the Government a strong mandate to introduce termination of pregnancy services and it remains my priority that the legalisation is fully implemented so that all women in Ireland can access these services quickly and easily without basis or judgment.”

The Labour Party has called on Mr Harris to introduce the so-called buffer zones following the anti-abortion protest outside the National Maternity Hospital in Holles Street.

Labour Senator Ivana Bacik said the legislation to prevent this has been allowed to fall off the agenda. “Exclusion zones were not included in the legislation for abortion passed in December 2018 and many of us raised this issue during the debates at the time, and warned about the risk such protests could have on the wellbeing of women.

“The wide reporting of the use of insensitive props at a protest outside Holles Street recently validates calls for exclusion zones. The creation of exclusion zones was promised by Simon Harris last year and yet it has still not materialised. “He has allowed the issue to fall off the agenda and women accessing healthcare have been left to deal with the fallout.

Nobody should be shamed or judged while entering a GP’s surgery. Nobody should have to see the images and props used by these groups as they leave a maternity hospital.”

Mr Harris condemned the protests and said they cannot be tolerated. “Once again, some anti-abortion protestors continue to show disregard for women availing of a range of services in Holles Street. Their so called ‘protest’ is grossly insensitive to women who may be in hospital after suffering a miscarriage or women who are receiving the devastating diagnosis of a fatal foetal abnormality. It is cannot be tolerated or accepted.”

The Minister previously indicated that he would have legislation ready by the summer recess to provide for exclusion zones. Meanwhile the HSE has advised the Department of Health that it intends to appoint a clinical lead for termination of pregnancy services.

Mr Harris is likely to meet with termination service providers in the coming weeks to discuss any issues that have arisen in the roll-out of services since January. Ten out of 19 hospitals are currently providing full abortion care to women across the country. There are more than 300 GPs providing such care to women who are under nine weeks pregnant.