Harris not informed of cervical screening issues until July 10th 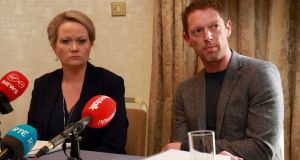 The Minister for Health Simon Harris has said it is regrettable that the HSE did not inform him, his department or patient representatives at an earlier stage about delays in issuing cervical screening results to about 800 women.

Last week it emerged that the women did not receive their repeat screening results from the US laboratory, Quest Diagnostics in Chantilly, Virginia because of a computer glitch.

“I think it’s really important that the HSE does carry out an external independent review in relation to its own processes. Clearly there was a communications issue here, where they believed laboratories had conveyed results to GPs and women and that had not happened.”

HSE chief Paul Reid said on Monday that he had asked Dublin City University president Prof Brian MacCraith to be the independent chairman of a “rapid review”process to be carried out into the controversy.

The delay in issuing the results were first reported in the media on July 11th though the HSE had known about it since last February following a complaint by a woman about a delayed test.

The HSE informed the Department of Health on June 25th that there was an IT issue. The HSE was asked to investigate the extent of the problem and reported back to the department again on July 10th.

Mr Reid said the review would set out to determine the exact chronology of events from the time the IT issues first emerged until they went public.

The review will set out to establish if correct procedures were followed when the HSE first became aware of the delays.

Mr Reid said the delays in informing the women involved were “not acceptable” at a time when the HSE was trying to rebuild confidence in the cervical screening programme in Ireland.

“I want this work to commence quickly and be completed in a timely manner, and will ensure Brian and the team are aided in their work by the full co-operation of all involved in the HSE and in the National Screening Service.”

The issue came to light when a woman asked the Department of Health about a delay in receiving her test results.

The query was passed on to the HSE for investigation to see how widespread the problem was and the response came back to the department on July 10th.

“My understanding is that letters with results went in the post to GPs last Thursday, so my expectation is at this stage is that many GPs will have received those results for women, I also understand that the HSE intends to write directly to them and so I would hope that by the middle of this week most women will have received their results, if not all women.

“Certainly the aim is that all women will have received their results by the middle of this week.”

Labour Party health spokesman Alan Kelly said the terms of reference of the new review were “a joke”. He specifically criticised that the role of the Minister’s’s office was not included.

A victim of the cervical cancer controversy on Monday accused the HSE and the Department of Health of not giving her full information as a patient advocate.

Lorraine Walsh, whose misdiagnosed smears deprived her of the opportunity of having a child, said she is contemplating resigning from the Government committee set up to try and restore confidence in the CervicalCheck programme.

Ms Walsh is one of two patient representatives on the CervicalCheck steering committee which is pushing for reform of the service.

The other representative is Stephen Teap, whose wife Irene died in July 2017 having been twice given the all-clear following misdiagnosed smear tests.

Ms Walsh said she only found out “45 minutes before the Six One news” last Thursday about the delay.

Ms Walsh told The Irish Examiner on Monday she believed the committee was now a waste of time as “the HSE and Department of Health officials are being selective in what they tell us”.

She believes pre-meetings take place between officials from both departments and “then we get the spin”.

She added: “I thought we were building up a relationship and trust, but I now realise they are withholding information and being selective in what they tell us. I feel like a fool. I’m considering my position at the moment.”