Dublin street parking charges increase by up to 70% from today 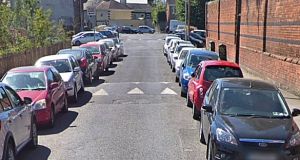 Those parking near the Coombe hospital will now face the €1.60 hourly charge. Photograph: Google Street View

Street parking charges in parts of Dublin will rise by up to 70 per cent from today, with an increase in tariffs and an extension of the most expensive parking zones.

Dublin city councillors last November agreed to a 10 per cent rise in on-street parking charges in high-demand areas of the city, the first parking charge increases since 2008.

The council is also extending each zone to cover more streets. The expansion will mean some motorists currently paying €1.60 an hour for parking will see the charge rise to €2.70, with others facing an increase of one third from €2.40 to €3.20 an hour.

The yellow zone will be extended on the north side only, with those parking in Phibsborough, particularly close to the Mater hospital, paying the €3.20 hourly charge.

The red zone is also increasing its reach on the north side, to encompass an area surrounding the new DIT college campus at Grangegorman. This zone will also be extended into the city’s docklands.

The 70 per cent jump to the €2.70 in the red zone will also hit residential roads in Ranelagh and Rathmines, previously included in the €1.60 zone. The red zone will be extended to include Harold’s Cross for the first time.

Areas previously considered low-demand, where parking is just €1 an hour, are being brought into the green zone. Those parking in Kilmainham and around St James’s Hospital and the Coombe hospital will now face the €1.60 hourly charge.

The survey of 1,000 adults, commissioned by property investment firm of Lotus Investment Group, found more than 70 per cent would live in apartments long term if larger “family-sized” homes were built.

However, two-thirds of respondents said they would require a parking space, with just a quarter saying they would forgo a space for an “excellent” alternative transport option, and 9 per cent said they would not require a space if the apartment was centrally located.