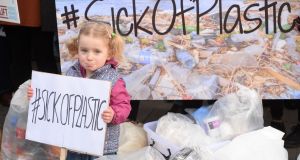 Astrid Gundersen (3), from Swords, at the Friends of the Earth protest outside the Dáil on Wednesday as the joint Oireachtas environment committee began hearings on the Waste Reduction Bill. Photograph: Alan Betson

There are strong indications that legislation for a mandatory “deposit return scheme” in Ireland for plastic bottles and a ban on single-use plastic material will be resisted by the waste industry and retailers.

As Ireland’s biggest waste difficulties were due to low-grade plastics and litter, introducing a scheme for drinks containers would do little to resolve the problem, the head of Repak told the Oireachtas Committee on Communications, Climate Action and Environment.

The committee is examining proposals contained in the Green Party’s 2017 Waste Reduction Bill to ban plastic cups, plates and cutlery and to establish a deposit/refund scheme for plastic, glass and aluminium drinks containers. It also proposes a ban on single-use non-compostable coffee cups.

Around 3 billion single-use plastic bottles, over 582 million aluminium cans and 718 million glass bottles are generated in Ireland every year, according to environmental groups who appeared before the committee on Wednesday.

They also cited evidence of escalating plastic pollution, “necessitating an urgent need for a deposit return system for plastic bottles” including the use of “reverse vending” machines in or near retail outlets.

Green Party leader Eamon Ryan said recent developments “reinforce the case for the Bill”. The Chinese government were restricting exports of Irish plastic waste to their country for recycling, the UK government had introduced a new recycling strategy, and the European Commission presented its new plastics strategy – “a defining document, which calls for an end to the throwing away and burning of our plastic waste”.

“The provisions in our Bill are fully in tune with the new European strategy and mirror what a myriad of other countries are now starting to do, including Scotland and the UK,” he added.

To date, Fine Gael and Independent members of Government had been arguing against the legislation.

“We may be misdiagnosing our litter and plastics problem” as being only associated with beverages containers, said Séamus Clancy, chief executive of Repak, which runs a nationwide not-for-profit packaging recycling scheme for industry and retailers.

“While we strongly disagree with some aspects of the bill, we acknowledge the positive social intentions behind the bill and why it was tabled . . . perhaps it will put a focus on the growing plastics issue that we face as a western society,” Mr Clancy added.

The Government must support “the straightforward and progressive policies in the Bill to tackle our escalating plastic problem”, said Mindy O’Brien, co-ordinator of the Voice environmental group.

The scale of plastic pollution meant measures needed to be brought in immediately, she said. “Our current system to tackle waste is clearly failing, with the likes of plastic bottles and disposable coffee cups continuing to foul our countryside and destroy our marine environment.”

Matt Collins, assistant secretary at the Department of Communications, Climate Action and Environment, said the Minister for the Environment, Denis Naughten, had welcomed the Bill but had concerns a ban on single-use plastic may run counter to an EU directive, and may need to be amended, as happened in France. The use of a levy might prove more effective than a costly deposit refund scheme, he said. Robust evidence on likely impacts was needed, and the department would support work on this front.

Ibec head of infrastructure Dr Neil Walker said a mandatory scheme, while well-intended, would have likely unintended consequences including an increase in carbon emissions, and could lead to scavenging for containers in the form of people “upending every bin on the street” in search of containers.