EU unveils plans to make all plastic packagin recyclable by 2030 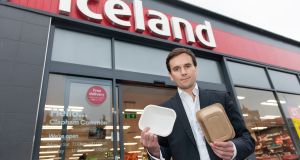 All plastic packaging across Europe will be recyclable or reusable by the end of the next decade, under plans to tackle marine pollution.

The first Europe-wide strategy on plastics also includes proposals to reduce the consumption of single-use plastics and restrict the intentional use of microplastics, such as tiny beads put into cosmetics.

And it includes measures to boost recycling and cut marine plastics litter, including fishing gear.

The strategy was unveiled as Iceland became the first major retailer to commit to eliminate plastic packaging for all own brand products by 2023.

The retailer said it would be replacing plastic with packaging including paper and pulp trays and paper bags, which would be recyclable through domestic waste collections or in-store recycling facilities.

The move, which has been welcomed by environmental campaigners, comes amid growing concern over plastic pollution in the world’s oceans, where it can harm and kill wildlife such as turtles and seabirds.

Last week, prime minister Theresa May pledged to eliminate all avoidable plastic waste within 25 years as part of the Government’s environmental strategy, with calls for supermarkets to introduce “plastic-free” aisles.

Under the EU plans, an additional €100 million will be provided for developing smarter and more recyclable plastic materials, making recycling processes more efficient and tracing and removing hazardous substances and contaminants from recycled plastics.

First vice-president Frans Timmermans, responsible for sustainable development, said: “If we don’t change the way we produce and use plastics, there will be more plastics than fish in our oceans by 2050.

“We must stop plastics getting into our water, our food, and even our bodies.

“The only long-term solution is to reduce plastic waste by recycling and reusing more. ”

A spokeswoman for the Department for Environment, Food and Rural Affairs (Defra) said: “While it’s welcome the EU is now looking at restrictions on microplastics, we have already banned plastic microbeads in personal care products — the first European country to do so.

“Tackling the scourge of plastic is a critical part of our Green Brexit plans.”

Julian Kirby, plastic and waste campaigner at Friends Of The Earth, said the Commission’s plans, including action on discarded fishing gear and measures to prevent the loss of plastic pellets which make up the second largest source of microplastic pollution, outstripped the UK Government’s “lofty but detail-free” environment plans.

“It’s brilliant that the European Commission is taking global leadership by laying out a strategy to get rid of the single-use plastics polluting our seas, rivers and countryside.

“With an estimated one third of fish caught in the English Channel containing plastic, it’s not just marine life like whales and turtles suffering from plastic pollution, our own health is at risk as well.”

“The proposed recycling and design initiatives and voluntary agreements with industry will go some way to combating this problem.

“But more drastic action is also needed to curb the overall production of plastics in Europe.

“We need to start phasing out and banning the worst plastic types and unnecessary, single-use plastics now, not in over 10 years’ time.”–PA