War on plastics: Brussels plans series of measures ahead of 2030 target 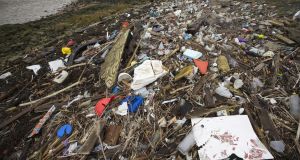 Plastics and other detritus line the shore of the Thames Estuary. Photograph: Dan Kitwood/Getty Images

Europe is planning to ensure all plastic packaging in the EU is recyclable by 2030.

The move is part of a new policy on plastics published by the European Commission.

EU regulators have been ways to increase recycling of plastic, particularly as waste piles up in ports after China banned imports of “foreign garbage” since the start of 2018.

“We have all this raw material, and from the beginning of the year now even more, because China will not take our waste,” Mr Katainen said at a press briefing.

The Commission is eyeing a range of environmental taxes – including revenue from its carbon cap-and-trade Emission Trading System (ETS). An additional consideration is finding a way to plug the whole left in its budget when Britain exits from the bloc at the end of 2020 deprives it of revenue.

Such proposals are opposed by some member states, who prefer to keep the revenues in national coffers, and environmental campaigners, who want to see the proceeds reinvested in efforts to stem pollution.

The Green Party welcomed the publication of the EU’s first strategy to tackle plastic waste, but warned “Ireland must take decisive action at national level in addition to the measures proposed”.

Party leader Eamon Ryan said: “We welcome the publication of this strategy which calls for all plastic packaging in the EU to be recyclable by 2030, encourages the refilling of water bottles through the promotion of public drinking fountains and proposes a ban on products containing micro-beads and micro-plastics.”

“The Irish Government now needs to take strong action on a national level to tackle plastic waste. Switching from a throw-away plastic culture will allow us switch to a new circular economy which delivers new jobs as well as cutting pollution,” he added.

The Joint Oireachtas Committee on Communications, Climate Action and Environment is meeting on Wednesday to review the Waste Reduction Bill which was tabled by the Green Party.

“The timing of the report could not be better as we seek to end the use of plastic disposable cups, single use plastics, and introduce a refund scheme for plastic bottles and other containers,” Mr Ryan said, “The Government now needs to change tack and support our bill which is in tune with European policy.”

Party spokesperson on marine protection Senator Grace O’Sullivan said: “According to the figures cited by the Commission today, European citizens generate 25 million tons of plastic waste a year, but less than 30 per cent is collected for recycling. It also says that across the world, plastics make up 85 per cent of beach litter.”

She added: “Plastic waste needs to be tackled urgently, for health, for environmental and economic reasons.”

Europe’s budget commissioner Gunther Ottinger tweeted on Tuesday he had won the support of fellow Commission officials for a levy on production of polluting plastics. Oil-derived plastic mostly ends up in landfills or is incinerated.

EU member states and the European Parliament reached an agreement last month to set a legally-binding target for the bloc to recycle 55 per cent of plastic packaging waste by 2030 and a ban on landfilling separately collected waste.

EU regulators through the new policy want to ensure plastic packaging itself is fully recyclable and to improve consumer labelling by creating new quality standards.

The Commission said it would introduce measures to curb ocean-polluting microplastics, such as those used in cosmetics. New port reception facilities will seek to streamline waste management to ensure less gets dumped in the ocean.

“More and more it is becoming a health problem because it is degrading, going to little chips; fish are eating it and it is coming back to our dinner table,” Mr Katainen said.

Before the ban, China was the world’s biggest importer of plastic waste, including supplies from Ireland. It is expected much of that the waste will eventually go to other countries in southeast Asia, such as Vietnam and Malaysia. (Additional reporting: Reuters)