Another Life: Michael Viney on a chance for Ireland to catch up with other countries 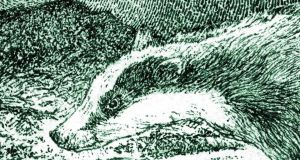 Irish badgers: the potential of vaccination has only now arrived in hard evidence. Illustration: Michael Viney

In the spring of 1991 a major conference on the Irish badger’s link to tuberculosis in cattle gathered scientists, government vets and wildlife conservationists at the Royal Irish Academy in Dublin. “Tensions,” I reported here, “ran beneath the two days of papers and discussions like tunnels through a badger sett.”

Already under way were experiments in clear-culling of badgers in cattle-TB “hot spots” by the Eradication of Animal Disease Board, set up by the Department of Agriculture.

“Are you prepared to take out nursing mothers and let the cubs die underground?” was one challenge. “We have no option,” the head of the eradication board replied. “We have no way of distinguishing one badger from another.” As to whether badgers did, in fact, return the infection they got from cattle, he found the world divided between “believers” and “unbelievers”.

Nearly 30 years on, little of that conflict has changed. As Pádraic Fogarty, lead campaigner of the Irish Wildlife Trust, writes bitterly in his new book, Whittled Away, “Whole careers have been built around the badger-culling programme, between vets, Department of Agriculture staff and contractors who do the dirty work. No longer is there any feeling that badgers are anything but the sole cause of TB.”

The culling of badgers, Fogarty computes, has topped 100,000, of which perhaps 80 per cent were healthy, with another 7,000 snared and shot each year, and hundreds have been killed on the roads. In the main culling areas, TB in cattle has significantly declined. Cattle-to-cattle contact remains the chief route of infection, but the guilt of the badger, still scientifically circumstantial, is widely assumed.

Culling in “hot spot” areas of cattle infection was the Republic’s early choice. In Northern Ireland it was not, and 2014 brought trials of the TVR method: trap badgers, test them for TB, vaccinate the healthy ones and “remove” – kill – the infected. Results, from two areas of Co Down, are expected in 2019.

In the Republic, however, the potential of badger vaccination has only now arrived in hard evidence. Authors of a four-year field trial in 755sq km of Co Kilkenny say their results “imply that with vaccination coverage in badgers exceeding 30 per cent, eradication of Mycobacterium bovis in badgers is feasible, provided that current control measures [on cattle] also remain in place”.

The team’s long and complex study, published this month in Preventive Veterinary Medicine, was funded by the Department of Agriculture. Having trapped, tattooed and microchipped badgers, the study assessed the protective effects of vaccination, and its action on the transmission of TB.

The badgers were given the vaccine (or a placebo for control groups) at the back of the throat. There were sweeps of recapture to test individual immunity. At the end of the trial all the badgers were “depopulated” and lined up for postmortems.

Vaccines were most eagerly gobbled up as chocolate-covered peanut bars. But badgers live in social groups, and the dominant animal can scoff the lot

Trapping enough animals safely – as against snaring them to be shot – is not simple. A 2012 Irish study found “more putatively trap-wary badgers identified in the population than trap-happy badgers, but wariness was not related to individual’s sex, zone or season of capture. Live-trapping efficacy can vary significantly amongst sites, seasons, age, or personality . . .”

The Kilkenny results have delighted scientists working for decades towards a vaccination programme. One is the mammalogist Dr Paddy Sleeman, senior researcher at University College Cork. He sent me an email: “Oh boy it feels good after all these years!” As producer of the strongest estimate of the Republic’s badger population (about 84,000 individuals), Sleeman is confident that 30 per cent of badgers could, indeed, be vaccinated.

In the early years of research, launched by the Department of Agriculture in 1998, one hope was that BCG vaccine could be scattered around badger setts in tasty baits. This borrowed from European success with baits in eradicating rabies in foxes.

Different flavours were tested in the field. Carob and cocoa powder were most eagerly gobbled up as chocolate-covered peanut bars. But badgers live in social groups, and the dominant animal can scoff the lot.

The Kilkenny results top some 100 published Irish research papers on badgers and bovine TB. Some studied badger behaviour, diet and group dynamics, which differ markedly between these islands. Others studied how well the vaccine worked. BCG for badgers is the same formula as for human vaccination, but the animals need many times the human adult dose.

In the UK a global shortage of BCG interrupted badger-vaccination programmes in 2016 to give priority to countries with the highest human-TB rates. This year brings resumption of a British government programme for badgers, along with continued sharpshooting in some areas.

Some UK county wildlife trusts imported vaccine from Canada. The Welsh government, which introduced badger vaccination in 2012, offers half the cost of a skilled service to farmers and other landowners.

When will the Republic begin to catch up?

Beetles and fire kill dozens of ‘indestructible’ giant sequoia trees 10:03
Two men injured in Co Clare shooting 08:57
Election 2020: Will Saturday polling day boost turnout? 06:00
‘You’re on your own down here after 5pm’ 05:56
Most secondary schools to close for day in pre-election strike 01:56