Daffodils in Donegal, attracting goldfinches in Armagh and a newt in Clare 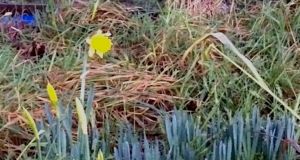 Daffodils along the roadside in Letterkenny

I planted teazles and burdock in the hope of attracting goldfinches. Both are now dried, but the goldfinches choose the burdock and have not been near the teazles up to December.

They’re saving them for later.

We bought a special nyjer seed feeder in November, but by January 1st no birds had come near it, and used the nearby seed and nut feeders instead. But success at last: on January 2nd there were 10 goldfinches on the nyjer feeder.

Each year our large copper plum tree is invaded by flocks of bullfinches, which studiously strip its emerging buds. Long ago we watched for them in February but they have been coming earlier each year, and this year they arrived in late November.

On December 28th, on the telephone wires passing through our garden I saw two collared doves grooming a starling, one on each side for quite some time, while another starling groomed himself next to them.

I saw three robins together in the garden. I know they start mating at this time of year, but I never saw three getting along seemingly peacefully.

I spotted these daffodils on the roadside in Letterkenny on December 26th.

The problem with flowers blooming unseasonably early is that they may be out of sync with the life cycle of insects, which are necessary to feed the new broods of birds.

This little newt came into the house just before Christmas.

One difference between a newt and a lizard: the newt has four toes on the front feet and the lizard has five.