Only four dog fouling fines issued in Cork in 21 years 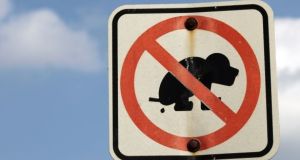 A councillor in Cork has expressed his outrage at the fact that just four dog fouling fines have been issued in the city since legislation was introduced 21 years ago.

Cork North Central councillor Kenneth O’Flynn said he knows of a boy in a wheelchair who has to disinfect his hands every day at school as his chair is constantly gathering dog excrement on the streets of the city.

The Fianna Fáil councillor said he counted more than 100 samples of dog excrement on a recent walk along Blarney Street on the northside of the city.

“It is ridiculous. Cork City Council is spending thousands on kids doing drawing competitions on anti-dog fouling rather than tackling the problem. It’s the HSE that should be educating people,” he said.

“On top of all that, the licencing system is archaic. There is no actual database on dog ownership. If I don’t have a dog licence I can just claim it isn’t my dog. We should also have DNA testing [databases] which have worked successfully in other countries.”

Four fines were issued by the local authority as part of a month-long awareness campaign in April and May of last year. Those four fines have been the only fines issued in respect of dog fouling offences since the Litter Pollution Act was introduced in 1997.

In a statement, the council said the difficulty in issuing fines for offences under section 22 of the Litter Pollution Act 1997 is that the litter warden must actually witness both the dog depositing faeces and the person in control of the dog, neglecting to remove the faeces.

“The practicalities associated with this mean that is extremely challenging and time consuming to issue fines for such offences. Alternatively, a member of the public who witnesses an offence can make a complaint to the litter warden or to the litter management section. In such cases a fine will issue if the complainant is prepared to go to court if necessary and give evidence,” the council said.

In 2016, the latest year for which figures are available nationally, 2,821 on-the-spot fines were issued in the State for dog fouling. Policing was highest in the area of South Dublin County Council, which issued 1,029 of the fines.

Local authorities in Wicklow, Roscommon, Leitrim, Kildare and Carlow did not issue a single dog fouling fine in 2016.

“The crux of the problem here [in Dublin] is that local authority staff have been decimated. Dublin South Central has a pilot scheme that was very successful but that wasn’t rolled out across the city.

“I used to get asked for the anti-dog fouling [stickers] all the time. I haven’t been asked for one in six months. People who let their dogs foul the streets don’t think of the impact on people with mobility issues or on children.”