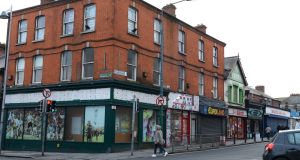 Residents and businesses in Dublin’s Phibsborough are asking the National Transport Authority (NTA) to remove traffic lanes proposed for the village as part of the BusConnects programme.

Submissions on the final plans for the creation of 16 continuous bus corridors across Dublin city under the BusConnects programme must be made to the NTA by Wednesday.

While segregated cycle paths are to be provided along most routes in the programme, for the Phibsborough route the NTA is proposing to divert cyclists away from the village by creating a bypass at the Royal Canal down the side of Mountjoy Prison and underneath the North Circular Road to head south on Royal Canal Bank.

However, local residents and business group Beyond the Junction, formed in response to the NTA’s proposals, said the plan prioritises people travelling through Phibsborough over people who live and work there.

“We strongly disagree with keeping two general lanes for motor traffic, not least because there simply isn’t room for them without sacrificing cyclist safety, bus lane flow and footpath size,” the group’s submission to the NTA said.

The group proposes removing one of the four traffic lanes to create space for cycle lanes, wider footpaths, “parklets” – small seating areas – and loading bays. This would require cars approaching the Doyle’s Corner crossroads to share the bus lane, but buses would be given priority at the traffic lights to allow them to travel through the junction first.

Under the group’s proposals, the same system would apply on the North Circular Road, which will not have a BusConnects corridor, where it runs through Doyle’s Corner.

Phibsborough has low levels of car ownership and is well served by public transport, including the Luas, the group said. “It is therefore extremely disappointing (and contrary to the objectives of BusConnects) to see that the plan prioritises people travelling by car, instead of encouraging a safe, continuous cycle route on the main road. Phibsborough village had deteriorated because of the sheer volumes of cars going through it: it will continue to do so if the road capacity for motor traffic is not reduced.”

The coronavirus pandemic had seen a shift to people shopping in their local areas, it said. “We don’t think the plan was good before Covid-19 – it is now outdated with the pandemic and its impacts on travelling and working habits.”

Concerns have also emerged on the south side of the city in relation to the BusConnects plans for Dolphin’s Barn. Former Dublin City Council planner Kieran Rose said the number of traffic lanes in the area at its South Circular Road junction would increase under the NTA’s plans.

“This will be very damaging I think to [the] environmental quality of the village, making it more traffic-dominated and further severing it from its environs to the east.”

The project could also hamper the city council’s plans for a village environmental improvement scheme, he said.

“It seems to me that these National Transport Authority/BusConnects proposals are based on a similar ideology that sees inner city residential streets as ‘arterial routes’ where through traffic is prioritised over the interests of residents and pedestrians.”

The NTA intends to lodge an application to An Bord Pleanála for the corridors next March.