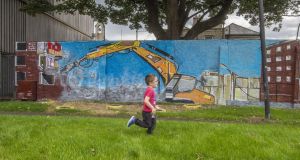 StTeresa’s Gardens: plans to be advanced for more than 700 homes .Photograph: Brenda Fitzsimons / THE IRISH TIMES

The State’s Land Development Agency (LDA) is to advance plans for more than 700 homes at St Teresa’s Gardens in Dolphin’s Barn, a decade after Dublin City Council’s scheme for the dilapidated 1950s flat complex collapsed.

The LDA said it has reached agreement with the council to develop a design and planning application for social and cost-rental housing on the site close to the Coombe maternity hospital and the South Circular Road.

A design team has been appointed by the LDA with a stakeholder consultation process beginning in the new year and a planning application expected in early 2022. The LDA said it would work with the council to “facilitate the delivery of public housing on the site”. It is expected 30 per cent of the homes will be used for social housing, while 70 per cent will be cost rental, where the rents are based on the cost of building and managing the apartments.

Once one of the city’s largest council flat complexes, St Teresa’s Gardens was earmarked for regeneration in 2005, but the plan was scrapped in 2009 after the collapse of the property market.

The 700 apartments will form part of a new urban quarter of more than 2,000 homes. In 2017, the council produced a masterplan for St Teresa’s, along with adjoining former Players Wills cigarette factory and Bailey Gibson packaging planned on the South Circular Road. The two former factories are owned by US property group Hines which plans to build almost 1,400 homes.

Hines was granted permission for the first 416 of these by An Bord Pleanála in September. Local residents have sought permission to take a judicial review of the board’s decision.

Some city councillors have resisted the involvement of the LDA in developing council land, with parties on the left adamant the council should develop its own land. Councillors recently rejected a plan for the development of housing at a council-owned site at Oscar Traynor Road in Santry, which involved the sale of land to a private developer.

The LDA said it will provide the “finance and resources to progress the project through the planning process”. However, no decision has yet been made on how the development of the site will be funded.

“The LDA will work with [the council] and other stakeholders to develop an optimum funding and delivery plan for this strategic site, which would be subject to separate council approval,” it said.

An agreement in relation to the development of the site “is the sole preserve of the elected members”, it said.

Disagreements have recently arisen over the cost of developing housing on local authority-owned sites. Figures provided by Minister for Housing Darragh O’Brien in response to a parliamentary question from Sinn Féin’s Eoin Ó Broin last month indicated the “direct build” cost of social housing in Dublin city was an average of €181,500.

However, it has since emerged this related to the construction of just 45 homes, half of which were not new build housing, but were the housing the council had refurbished at Priory Hall, which cost the council just under €141,000 to redevelop.

Mr O’Brien has this week issued new figures indicating that the average cost of homes approved for construction on city council lands in the last two years was just under €384,000.