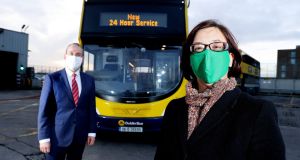 Ray Coyne of Dublin Bus and Anne Graham of the National Transport Authority at Thursday’s announcement of the new 24-hour service for Route 39a. Photograph: Maxwells

A new 24-hour bus route is being rolled out by Dublin Bus. The 39a, which runs between Ongar and UCD, is the third 24-hour service announced by the company.

“The new service improvements, which include an additional 824 departures per week, are as a result of a €4.9 million investment, provided by the National Transport Authority (NTA),” it said.

The funding was made available through the Government’s July stimulus plan and will lead to the creation of 80 additional jobs.

Minister for Transport Eamon Ryan said as Ireland looks forward to a post-Covid future, “it is important that we resource our public transport system for the recovery”.

“These new services will give passengers more choices and more flexibility and will also see the creation of 80 new jobs,” he said.

Anne Graham, chief executive of the National Transport Authority, said the manner in which Dublin functions as a city has shifted and “it is no longer the case that the city shuts down at 11 or 12 at night”.

“We believe that enhancement like these, along with the revised bus network in Dublin, and the investment in our bus corridor infrastructure under BusConnects, will bring about the kind of improvements that people expect in a modern city,” she said.

Ray Coyne, chief executive of Dublin Bus, said “our public transport service must reflect the changing needs of customers and these changes will bring the many benefits of public transport to even more people and businesses including mobility, safety, sustainability and inclusion.”