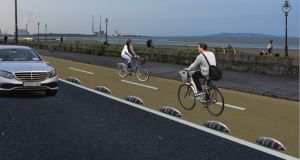 Car restrictions, including traffic barriers, reduced parking, and one-way systems, are proposed for Dublin’s Sandymount village as mitigation measures for the new Strand Road cycle path which is due to come into operation in February.

Dublin City Council has devised plans for the Dublin 4 village to guard against its streets becoming rat runs for motorists once the two-way Strand Road cycle route, which limits traffic on the coastal road to one lane, opens.

The council’s proposals will also introduce two-way cycle lanes in the village, following concerns about the lack of safe cycling infrastructure, particularly for school-going children.

The council last August announced plans to trial the two-way Strand Road cycle path, which involved a one-way traffic system with cars allowed to travel outbound only to the Merrion Gates.

Chief among these concerns was the fear traffic would be displaced from Strand Road to the residential roads in Sandymount, causing congestion and making the streets unsafe for children cycling to school.

“One of the items that we have received a lot of correspondence about is the complete lack of cycling infrastructure within the village area and the concerns that it raises both in the current situation and during the trial,” Brendan O’Brien of the council’s transportation division said.

The council is proposing to introduce a two-way protected cycle route starting on the east side of Tritonville Road and heading to the village on Sandymount Road.

Heading south from Sandymount Green, two “quiet way” streets would be created by closing the link for cars between Newgrove Avenue and Durham road with traffic barriers. These roads would effectively become cul de sacs, allowing cyclists and walkers to pass through, and maintaining access for residents, but banning through-traffic.

On-street parking would be limited along the route with a small number of parking and loading bays retained.

The proposals will be presented to local city councillors on Monday and subsequently circulated to a community consultation forum chaired by Lord Mayor Hazel Chu. A meeting of the forum will be held in January.

The council is also installing pedestrian crossings at Sandymount Green and is conducting traffic monitoring throughout the village area and on Strand Road. The six-month Strand Road cycle path trial had been due to begin next month, but has been deferred until February to prevent construction in the village during the Christmas period.