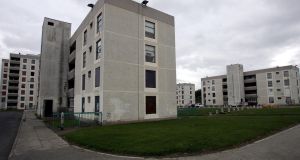 Plans for Dublin city’s first cost-rental scheme at the former St Michael’s Estate in Inchicore will be submitted to An Bord Pleanála in April.

Rents for the apartments, aimed at low- and middle-income workers, are expected to average €1,300 a month, but could be reduced to €1,100 and possibly €900, if longer-term financing to build the scheme, and greater Government funding was forthcoming, the council’s head of housing Brendan Kenny said.

The council plans to build 484 apartments in blocks up to six storeys high on the site of the 1960s flat complex that was demolished in 2013.

About 400 (70 per cent) of the apartments will be used for a cost-rental scheme, with the remaining 30 per cent used for social housing.

Under the cost-rental scheme rents will based on the cost of financing, building and managing the apartments, rather than market rates.

While the Government has yet to publish the terms of the scheme, it is expected that single people earning up to €50,000 and couples with an income of €75,000 would be eligible.

The social housing will be funded by the Department of Housing, and the council will finance the cost-rental element through a €150 million loan, with the European Investment Bank, the majority funder. Loan repayments would cost the council €7.2 million annually. The apartments are expected to cost €375,000 each to build.

These costs would result in average rents of €1,500. However, the site will be eligible for Government subvention of €50,000 per home, bringing the rent down to €1,300 monthly.

However, Mr Kenny said these rents could be reduced further if the loan term was extended from the standard 25 to 35 years and the subsidy increased from €50,000 to €100,000.

The council hopes to have secured permission for the scheme by January 2022, with construction underway by the end of that year. The scheme is expected to be built in three years.

The cost-rental plans for St Michael’s were announced in July 2018 by the-minister for housing Eoghan Murphy at an event which sparked controversy, when his Fine Gael colleague, Catherine Byrne, then-minister of state at the Department of Health said it was “probably one of the worst plans I’ve seen put forward for this site”.

Ms Byrne had wanted homes for sale, using an affordable purchase scheme, to be built on the site.

St Michael’s Estate had been earmarked for regeneration since the late 1990s. It was one of five sites to be redeveloped with social and private housing under a public-private partnership deal between the council and Bernard McNamara, which collapsed in 2008. In 2014 the council completed Thornton Heights on part of the site, a social housing complex of 75 homes.