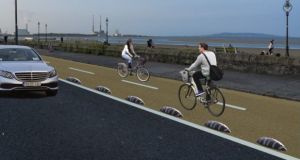 The Strand Road cycle route will come into operation in February for a six-month trial.

Sandymount village could be “absolutely destroyed” if a cycle path is built through it, a Dublin City Council meeting has heard.

The council’s transportation department is examining “mitigation measures” to calm traffic in the Dublin 4 village after the Strand Road cycle route comes into operation in February for a six-month trial.

The two-way cycle route on Strand Road will see traffic limited to one lane, with cars allowed to travel outbound only to the Merrion Gates. Local residents have raised the concern this will push cars into the residential areas of Sandymount.

A second two-way cycle path could be built through Sandymount village, along with car restrictions, including traffic barriers, reduced parking and one-way systems to curb traffic and make the streets safer for pedestrians and cyclists.

Brendan O’Brien of the transportation department told councillors on Monday he had been asked to provide a report on possible mitigation measures that could be put in place if particular problems arose as a result of the Strand Road cycle path.

One of these measures was protected cycle lanes in the village. A consultative community forum had also asked if there could be additional protection for cycling in Sandymount village, he said.

Fianna Fáil councillor Claire O’Connor asked why the idea of a cycle path through the village was only now emerging.

“The fact now that this second cycle track has emerged, you’d have to wonder if [it] is such a well-conceived idea, why wasn’t it introduced right back at the start of this process,” she said. “I have had concerns all along with this that it’s almost been made up as as we go along.”

Ms O’Connor also raised doubts about a consultation process which found that 56 per cent of respondents were in favour of the Strand Road trial.

“This figure being bandied about in the media that 56 per cent of people are in favour of the project, they are from all over the country,” she said. “Some of them are from Cork.”

While the cycle paths were being introduced as a Covid-19 measure, she said it was clear the measures would remain “long after Covid”.

Independent Mannix Flynn said the cycling proposals had been initiated by council chief executive Owen Keegan and the National Transport Authority, and not by local residents.

“Mr Owen Keegan can push through these measures whether we like it or whether we don’t...It seems to me that Owen Keegan is sitting pretty here laughing at us.”

Mr Flynn said he was “pro cycling” but the plan “will see Sandymount village on the one hand maybe getting a cycle lane, on the other hand being entirely and absolutely destroyed”.

Lord Mayor Hazel Chu said the mitigation measures were put forward to do what was best for the community during the trial period. “Ultimately it is a trial,” she said. “I know people don’t believe it’s a trial, but it is a trial.”

Labour’s Dermot Lacey said a situation had emerged where “the local community – or large swathes of it – just don’t trust Dublin City Council on this”.

Mr O’Brien said the mitigation measures would be introduced only by agreement.