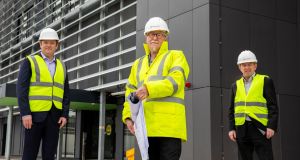 Tallaght in Co Dublin is to become the first major urban centre in Ireland where many buildings will soon be availing of a very cheap source of energy known as district heating.

In this instance, the excess heat that will be used to warm the buildings will come from a large data centre in the area being run by Amazon Web Services (AWS).

District heating is common in many large cities in Europe, where waste heat from local industry, power stations or incinerators is used to heat other premises. The option is availed of in very few instances in Ireland, although the programme for Government commits to scaling up its deployment.

It will operate the Tallaght District Heating Network, which when completed is predicted to reduce carbon emissions in the local authority’s area by nearly 1,500 tonnes per year.

The network will use excess heat from the recently completed data centre to provide low-carbon heat to a mix of public sector, residential and commercial customers. AWS is providing recycled heat free of charge under its broader sustainability commitments.

Fortum, an energy supply company with extensive district-heating experience throughout Scandinavia and eastern Europe, was contracted to carry out the design, installation and operation of the network.

According to Heatworks, the network’s supply of low-cost, low-carbon heat is expected to attract more innovative businesses and development to Tallaght town centre, and facilitate educational programmes and start-up opportunities in renewable energy solutions, as well as helping to mitigate fuel poverty.

The project is partly funded by the EU’s Heatnet programme promoting carbon reduction through district-heating in Europe’s northwest. It is also receiving €4.5 million from the Government’s climate action fund and direct funding from SDCC.

It will begin supplying heat before the end of 2021, with initial customers being SDCC and the Tallaght campus of the Technological University Dublin. Council buildings heated by this project will include SDCC’s County Hall and County Library, followed by the Rua Red arts hub and the Civic Theatre.

By 2024, the heat will also be supplied to nearby developments recently given planning permission, including affordable housing units and student accommodation.

He believed this scheme could become a template for other districts across Ireland. “We look forward to future collaborations as south Dublin county moves towards a low-carbon future,” he added.

“We’re thrilled to be supporting . . . [this] district-heating scheme, which will see the excess heat from our data centre being used to reduce carbon emissions in Tallaght over time,” said AWS Ireland country manager Mike Beary.

Eddie Conroy, county architect for SDCC, confirmed plans to provide the heat source to 3,000 to 5,000 residential units – mainly apartments – in the medium term.