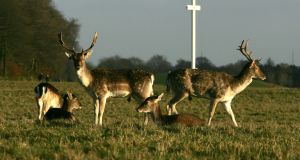 The public has been warned not to feed or take “selfies” with Dublin’s Phoenix Park deer this Christmas to prevent malnourishment and stress among the animals.

Families have been asked to instead write a letter to “Rudolph” which can be posted at any of three specially installed Christmas post boxes in the park.

Although there are signs throughout the park directing people not to feed or approach the deer, increasingly large numbers of visitors are causing “undue stress” to the wild animals, the Office of Public Works (OPW) said.

The OPW is for the first time issuing an appeal to the public to stay at least 50m from the animals, and in particular not to offer food, or try to “pose for selfies,” park superintendent Paul McDonnell said.

“Deer have been the subject of many books and films and have a special place in our hearts. However, these depictions often make them appear domesticated which they are not,” he said. “Over the last number of years, particularly with the onset of mobile phones, people want to get ‘perfect pic’ with the deer, because they think they are cute and cuddly, but these are wild animals.”

While some visitors tried to feed the deer junk food, most offered them carrots or bread in the “well-intentioned but misguided” belief these were suitable foods, he said.

“The park provides the perfect feeding habitat for the deer and other food such as carrots or bread are harmful and actually cause malnourishment and long-term harm.”

Research conducted in collaboration with the school of biology at University College Dublin, indicated the interactions with people were putting the deer under damaging levels of stress, Mr McDonnell said.

“Offering food can cause competition amongst the deer resulting in injuries and high stress levels. Their natural cycle of grazing, ruminating, sleeping and socialising is interrupted. They can become aggressive, they may bump into each other as they compete for the food, and this can cause fights to break out.”

He also cautioned people to be mindful that these are large animals, which can weigh 80kg.

“The deer pose a significant threat of injury, especially to young people given their size and potentially erratic behaviour.” Close contact can cause the exchange of disease between wild animals and humans, he said.

While the number of visitors to the park had increased significantly since the coronavirus outbreak, the OPW was particularly concerned about interactions with the park’s more than 500 deer in the run up to Christmas, given their association with Santa Claus.

“As an alternative to feeding the deer the staff of the Phoenix Park have set up a number of post boxes for children to drop off letters to Rudolf,” the OPW said. These will be located at the car parks for the Papal Cross, visitor centre, and the camogie grounds off Chesterfield Avenue.

“We are asking all families with young children to use these as way to show their concern for the well-being of the wild deer.”