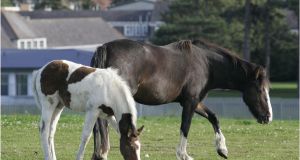 Officials said it was clear the problem of stray or unwanted horses has not gone away. Photograph: Dara Mac Dónaill

Local authorities do not have the sufficient professional and technical resources to deal with the increasing incidence of horse welfare issues, an Oireachtas committee has heard.

Officials from the Department of Agriculture, Food and the Marine, as well as the County and City Management Association (CCMA) were before the committee on Tuesday to discuss animal welfare and the control and management of horses.

Paddy Mahon of the CCMA, which is the representative body of local authorities, said the issue of stray and unwanted horses has become “particularly pronounced in the post-Celtic Tiger period”.

He provided figures that showed the number of horses seized and euthanised has been in decline since 2014, and rejected the “perception on the part of some members of the public” that local authorities are “wilfully putting down horses that could be re-homed”.

“Many of the horses seized are in a very poor condition and few if any are micro-chipped,” he said. “The main reason for such seizures arises from public safety concerns. There are obvious dangers associated with unsupervised horses in public areas.”

Mr Mahon said it was “clear” that the problem of stray or unwanted horses, as well as associated welfare issues, “has not gone away despite all efforts”. Problems associated with seizing horses “are not declining”.

On the issue of how taxpayers’ money is spent, he said “considerable expenditure” has been incurred to date. “Seizing and impounding horses is time consuming and resource intensive,” he said. “It is a high-risk activity and will often require Garda assistance.

“Most local authorities use contractors for the purposes of seizing horses and providing pound facilities. The national tender currently in place needs to be fully assessed in terms financial and operational effectiveness.

“In the recently concluded national tender there were a limited number of contractors bidding for the work.

“This relates to a number of factors including, in particular, the skills required to deal with fractious horses, potentially volatile owners as well as the requirement to provide secure pounds for the mandatory holding periods.

“There are also significant health and safety risks and, accordingly, insurances can be very costly.”

Earlier, the Department of Agriculture chief veterinary officer Martin Blake said an issue had arisen in relation to “social commentary” in the area of animal welfare, where social media “is playing an increasingly prominent role”.

“Within society, we must acknowledge the way new technologies and media platforms provide a powerful tool in highlighting issues and getting engagement of citizens,” he said.

“However, as across all areas of online life, caution needs to be exercised with regard to the authenticity and veracity of postings; where opinion may be presented, or be misinterpreted, as fact; where incendiary or abusive comments are made.”

Other elements in relation to social media, Mr Blake said, include “where online commentary/conversations flow but where any suspicion or indeed evidence that people may have is not brought to the attention of the regulatory authorities”.

Even when the authorities are notified, it is “well after the event” which impacts on the ability to effectively investigate, he said.

“It is increasingly difficult for citizen to understand what the truth is. A significant challenge for us is to provide a trusted source of information.”